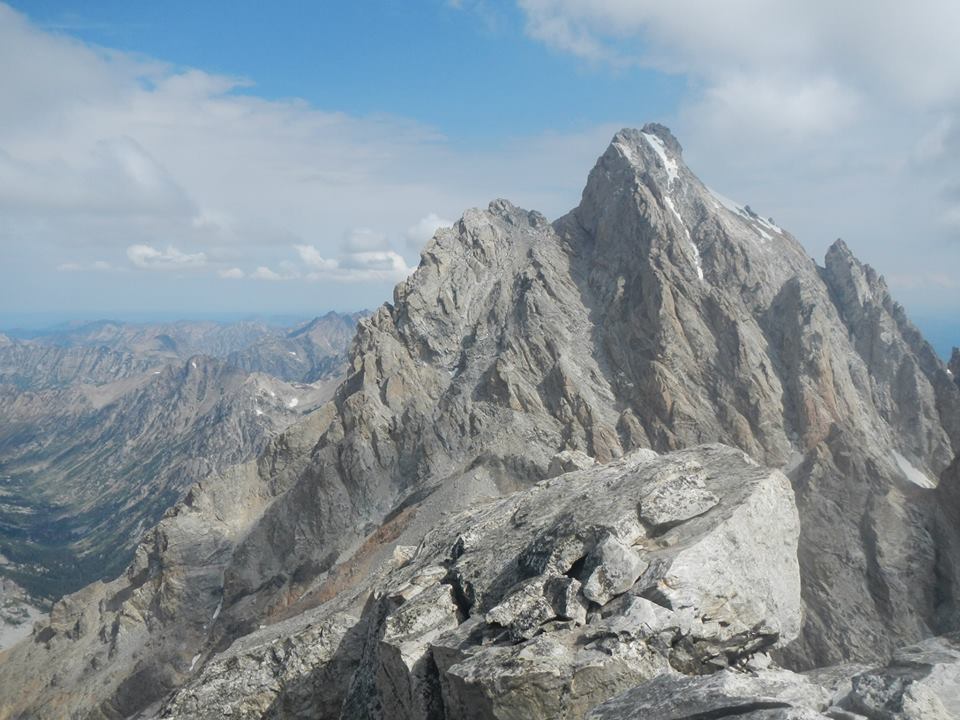 Who starts a hike at 3 a.m.?  If you say only crazy people, then paint me crazy.  Starting from the Lupine Meadows trail head parking lot in Grand Tetons National Park, my 8 fellow summit seekers and I had over 6,000 feet in vertical elevation to gain before accomplishing our goal.  Why so early?  As afternoons progress generally, chances for storms at higher elevations increase dramatically.  When you’re above tree line on the side of the mountain, your body is way more conductive and lightning friendly than any boring rock.

The climb began first with 4 miles of trail up the base of the Tetons through largely lodgepole pines.  With only the light of our headlamps and the moon, we were all abnormally quiet reflecting in the serenity of the early morning.  As the time neared 5 a.m., we paused for a group break having reached the bottom of the boulder field.  Finally, the sunlight began to creep over the horizon and we began the slow crawl over boulders higher than our heads. When climbing a mountain and hiking in general, if you’re in a group, you should do everything in your power to stay in that group. In our group all 9 of us were in good shape after hiking around Glacier and Yellowstone for two weeks, so stragglers were not an issue we worried about. After a bit of boulder hopping, two members of our group continued upward when the rest of us descended a little following the “trail”.  One of the two was used to hiking alone and the other was not as experienced, but was in great shape so we didn’t think much of it.  An hour later however, we lost sight of the two and the yelling began.  As it turned out, they continued too far to the left of the valley on the Northeast side of the Middle Teton and starting going up a different peak entirely.  We were able to catch John, who was closer to the group (the experienced solo hiker), but Brad, who was way out in front kept going, more on him later.

After reassembling and a speech on sticking together, we split up again (ironically) and left 3 members of the group to wait for our crazy friend who decided to climb the wrong mountain.  After reaching the lower saddle which would commence the final push of 1200+ vertical feet to the top, we were stopped by a breathtaking view of Iceberg Lake.  The western edge of the Tetons literally drops right down to it.  The final push is always the steepest part. (Which makes it my favorite part!)  I was not feeling the effects of the altitude at all and led the remaining 5 of us most of the way to the top.  Pausing for breaks and being careful on loose rock, the final ascent took us almost 2 hours. Near the top, 2 more from the group said they were not feeling well so they turned back and eight dropped to three.  The rest of us took this a cue to stop for a food break, but I was already consumed with summit fever.  With prowess a mountain goat would envy, I was at the top in what seemed like no time and I could see everything.  The Grand Teton looked like it was close enough to be grabbed and surrounding me were sheer rock faces and glistening blue lakes.  I was glad I continued the last little bit alone before the other two joined me.  There is no greater feeling of solitude than on top of a lone peak, no other word to describe your feeling but “infinite.”  After my hoots and hollers to tell whoever was listening in the cosmos that I had topped my mountain, I began the climb down so the others could experience their own Middle Teton.

And back to the courageous/foolish young man who summited his own peak that day, suffice it to say he got off very lucky.  As it turned out, Brad climbed a much more difficult route by hand on the way up, and once on top, was not able to find a way down.  After 20 minutes of pacing back and forth, swearing, and near self-defecation, he was able to find an old climbing rope.  He then bravely/foolishly climbed down the length of the rope, rocks falling on his head and everything, and went back to the trail head where he napped for 2 hours waiting for our return, utterly exhausted.  Thankfully on our way down, we had enough cell service to receive a voicemail letting us know he made it down safely.

So a variety of lessons were learned on the Middle Teton that day by the University of Cincinnati Mountaineering Club.  1) The larger the group size, the more important it is to stick together when attempting to summit a mountain on a day hike.  2) When you’ve never actually climbed a mountain before, don’t go off on your own thinking you’re Superman.  3) Drink lots of water during your hike.  As your body adjusts to altitude, you have to pee… a lot.  4) Take your time.  Start early, take sufficient rest breaks, and don’t rush yourself especially going from boulder to boulder and ascending on loose rock. 5) Most importantly, have fun!  Don’t ever get discouraged, the euphoria you feel on the summit of a mountain far surpasses as negative thoughts of not being able to complete the climb.