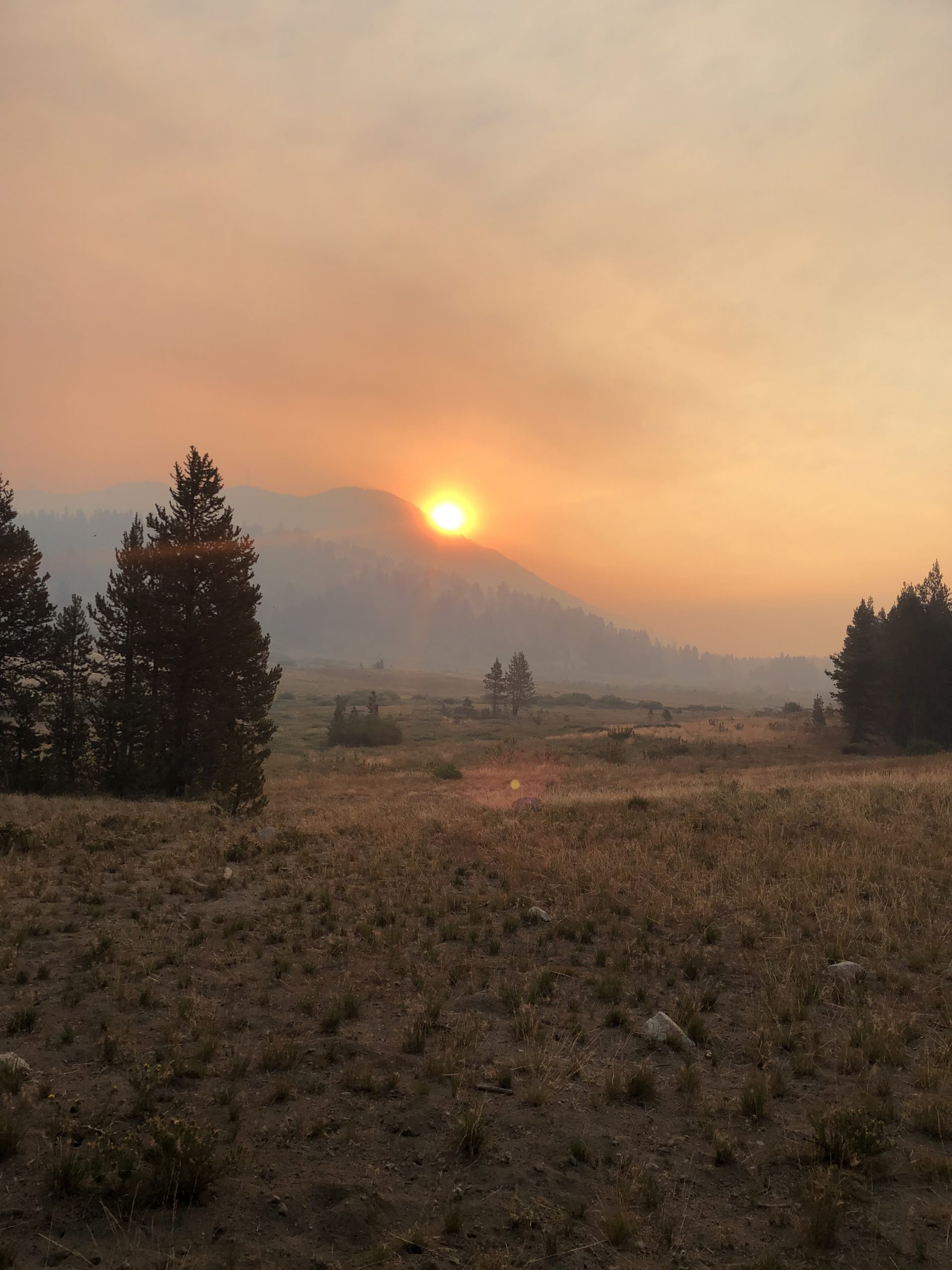 Through Fire and Flame: Attempting a Tahoe Rim Trail Thru-Hike

Since mid-way through college, it’s been a goal of mine to complete a thru-hike of the Tahoe Rim Trail (TRT); Emma has also had this goal. In August of 2021 we set out to attempt our mutual goal.

We drove 2,214 miles across the country to Tahoe City, California. We moved with purpose to the trailhead with only a brief distraction at a local gear shop. The trail started at a riverside park filled with people lazily drinking beers in inner tubes; that seemed nice. For us, however, the first day was miserable. I have never hiked a longer 13 miles in my life. On the bright side, we had lighter packs by not carrying anywhere near enough water for the 93-degree dry, sunny California day. 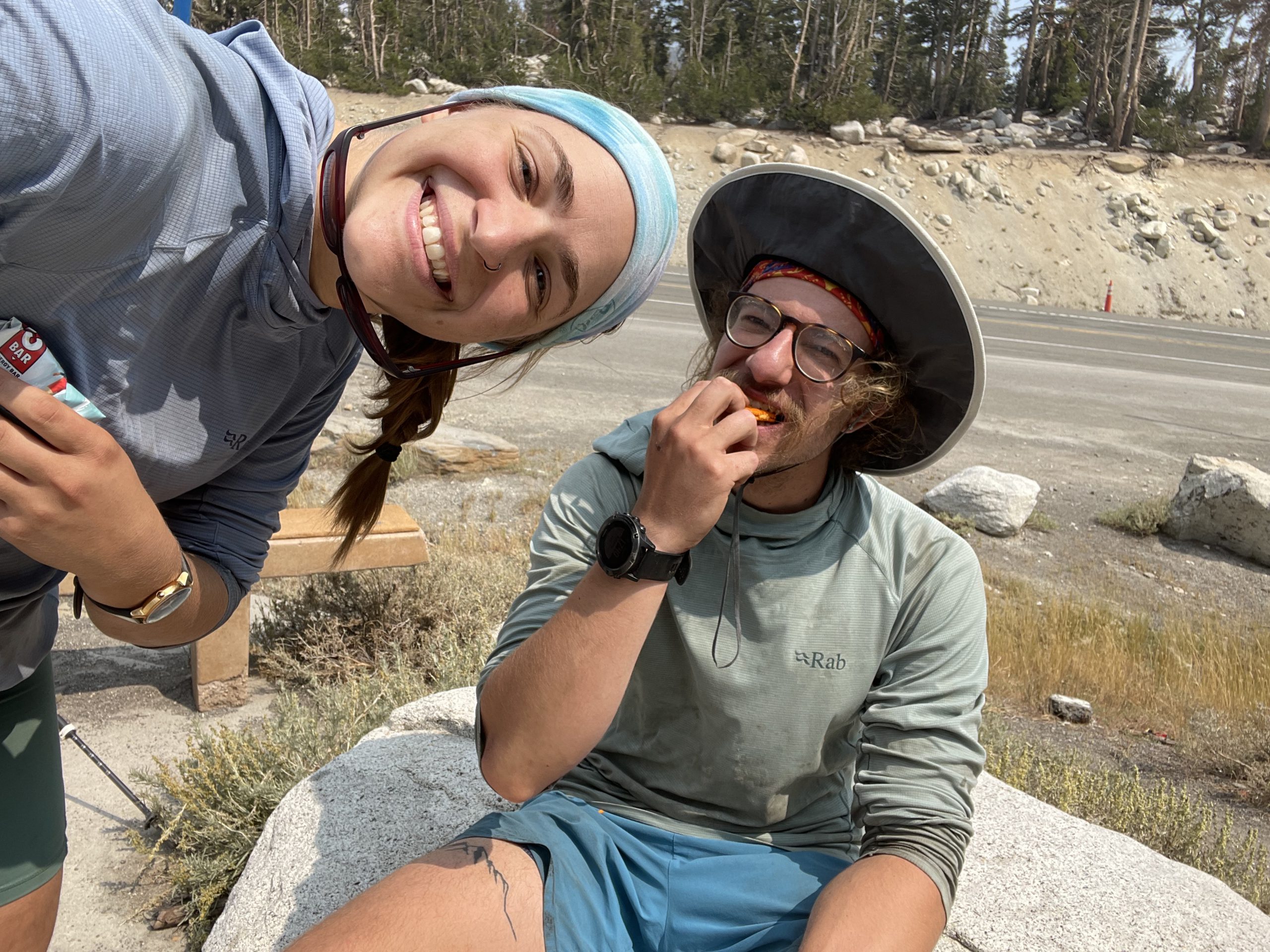 Water on the trail was scarce, which made high-mileage, high-elevation days tough mentally and physically. We would start each day at a water source and hike until the next water source, usually 13-18 miles. We’d set up camp for the night, excited to fill our Nalgenes with hard-earned water.

The second day of the trip was a steady uphill climb as we approached the highest point on the trail, Relay Peak (10,338’). We camped just before the summit, where we connected with fellow TRT hiker Michael. By connected, I mean he came into camp late at night and scared the shit out of us. In the morning we chatted about where we were camping the next day and what we had hiked beforehand. Proud of ourselves for finally starting early, we hiked upwards to Relay Peak. I was excited to summit and earn panoramic views of the Sierra. The heavy smoke from neighboring fires disagreed with me; the view from the summit was lackluster. 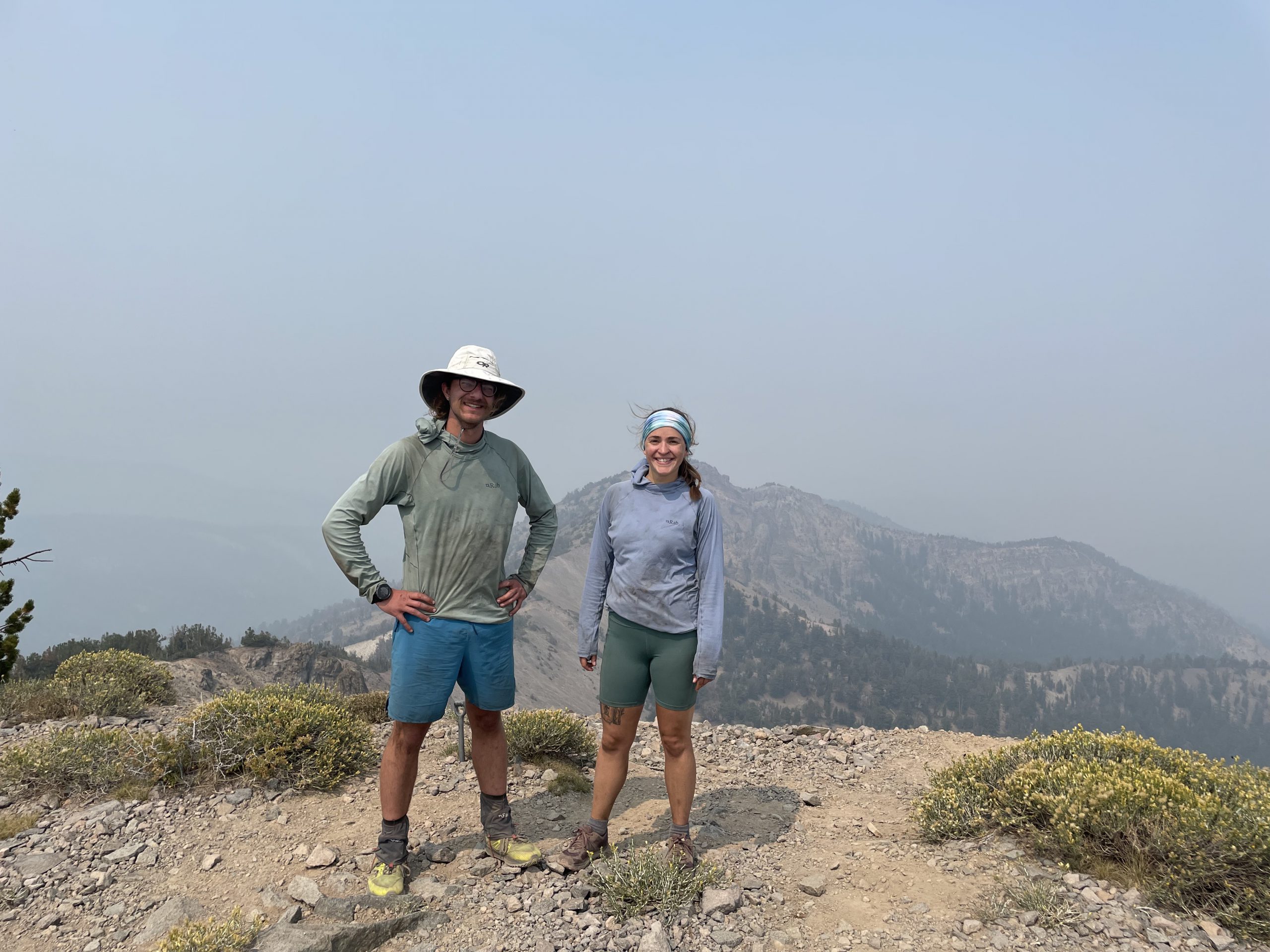 There was one silver lining to the summit, though. It was here that we met Will, another TRT thru-hiker. We sat on the summit eating nut-butter tortillas and talking about our experiences in the mountains. We leap-frogged with Will the rest of the afternoon before setting up camp together.

At this point, things seemed to be turning around. We had made friends and were making serious progress through the dry section of the TRT. The next day, we set off early and were greeted with more smoke than we had seen previously. We decided to push through, knowing the smoke was coming from the Dixie Fire on the northwest side of Lake Tahoe and we were heading to the Southeast. Unfortunately, this did not work in our favor; we soon found out there was a new fire on the south side of Tahoe right where we were heading: the Caldor Fire. 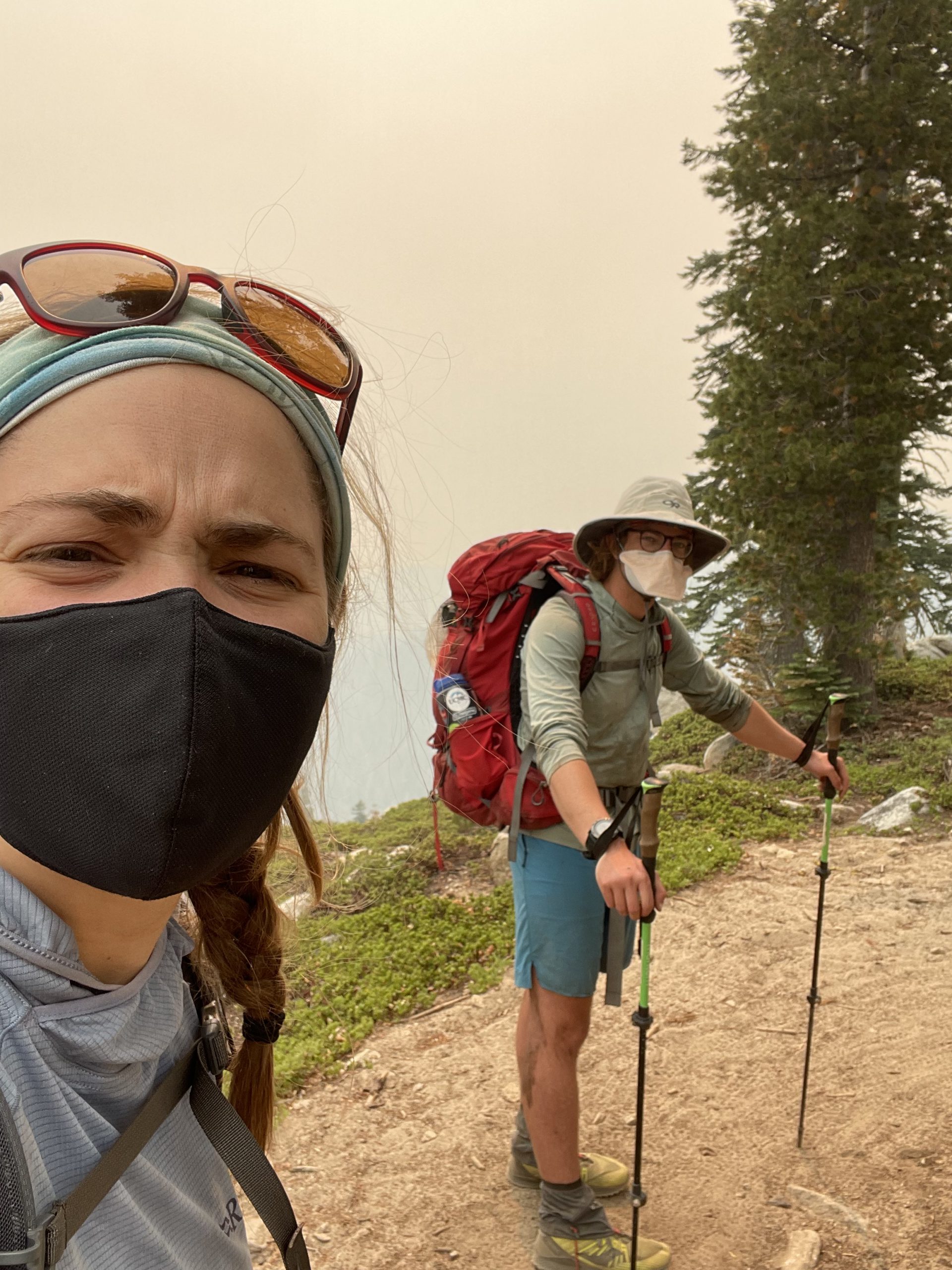 Because of our “alpine start” we were able to set up camp early in the day and enjoy a relaxing afternoon. Soon after, Michael showed up as well. The four of us ate dinner and talked about our time on the TRT. We were excited to have new friends, and Emma and I’s mood drastically improved.

We planned our biggest mileage for the next day, which involved a 4 a.m. start. Yet again, when the sun rose we were surrounded by smoke; we spent another day hiking through smoke. Emma and I hurried to hit our mileage, get out of the smoke, and get to our resupply. We’d been telling ourselves that the next day would be better, but there are only so many times you can trick yourself into believing that. 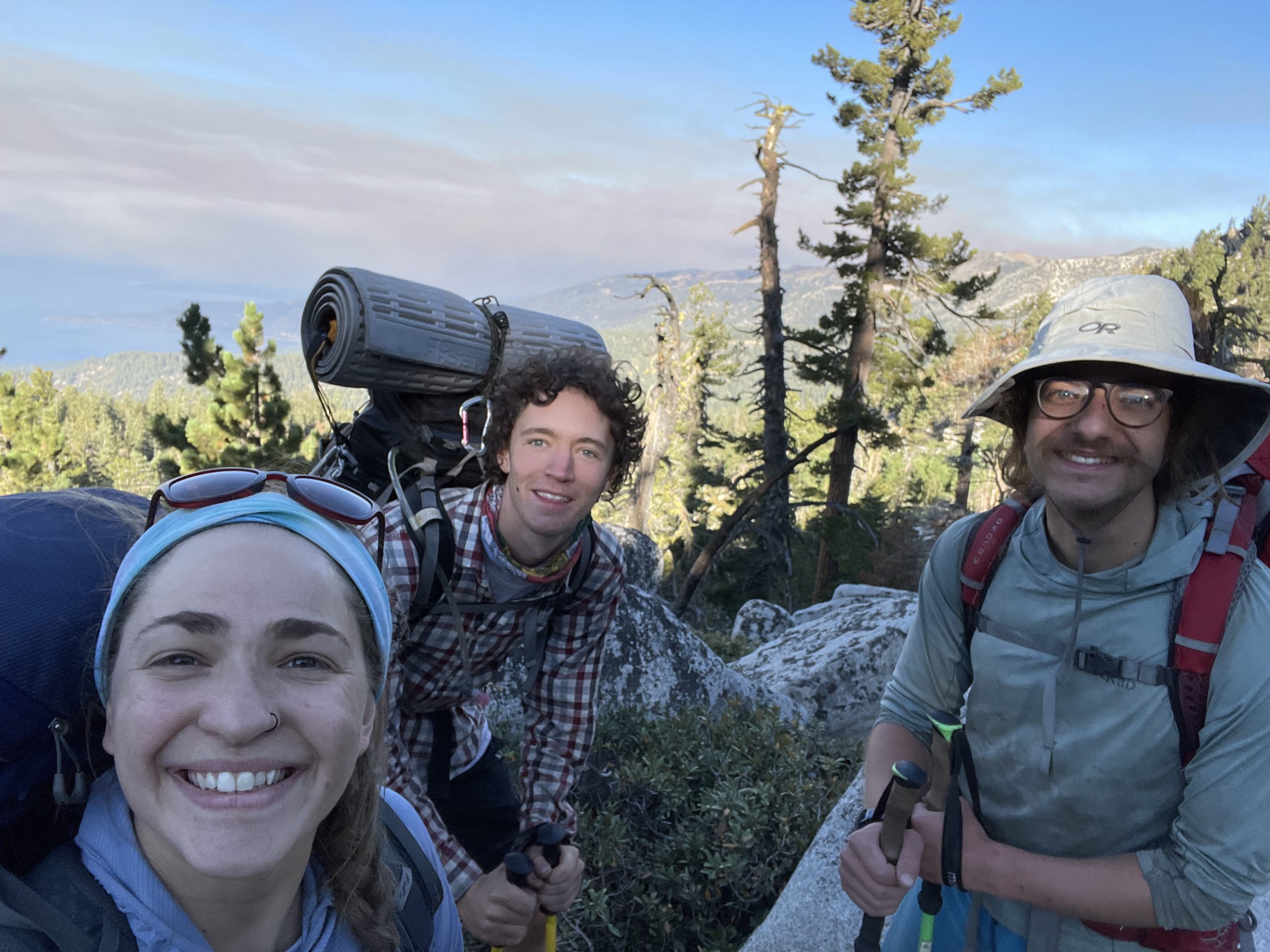 Once we were in town, we had to decide if we would return to finish the hike or if we would call it off. Completing the TRT immersed in smoke was not what we had envisioned. Soon after the discussion began, we heard that the TRT had been shut down and our decision had been made for us.

This changed a lot. We had planned to be on trail for another five to seven days. Our entire trip revolved around this one trail. From my time leading trips at the University of Cincinnati, I had ample experience with plans being broken due to weather, injury, and even poor morale, but nothing I had experienced before was of this caliber.

We spent the night in a hostel filled with trail stories and the stench of dirtbag. It was heaven. We haphazardly threw together a road trip through the desert southwest and packed the car to head back east.

We said goodbye to our new friends and hit the open road. Saddened by the early termination of our hike, it was hard to look forward to what lay ahead. 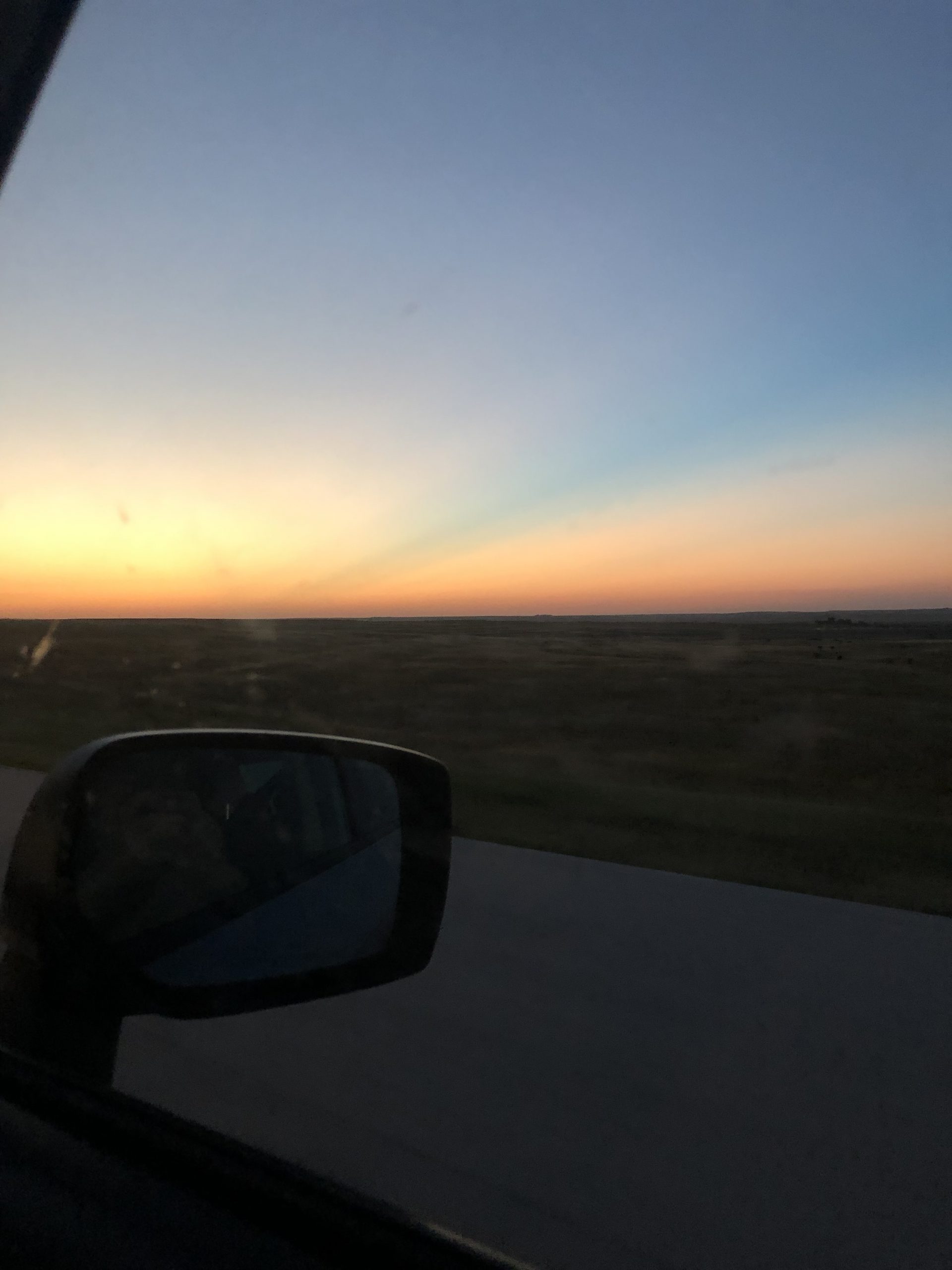 The next few days were filled with vast Nevada views, hot springs, and alpine meadows. An impromptu decision led to spending a weekend with my friend Greg in Cedar City, Utah. We climbed, meditated, hiked, yogaed, and sunk into the coldest bodies of water we could find. Soon we were on our own again with a new plan. We started toward Colorado and I set my sights on a loop of several 14ers. I made it up one before the weather forced me to turn back; a theme of the trip I was becoming used to.

From here we drove to Colorado Springs to visit friends Olivia and Isaac. We spent the next couple days relaxing, enjoying showers and meals from a kitchen rather than a small, dirty stove.

Although completing the 170 miles of trail wasn’t accomplished, I still got what I wanted out of the trip. I made new friends, spent many nights under the stars, saw my first wilderness bear, and pushed myself yet again with my highest mileage backpacking day, highest grade climbed outdoors, and first solo fourteener.

One day I hope to return to complete the TRT from start to finish, but for now I am content with what I have accomplished and look forward to new endeavors.