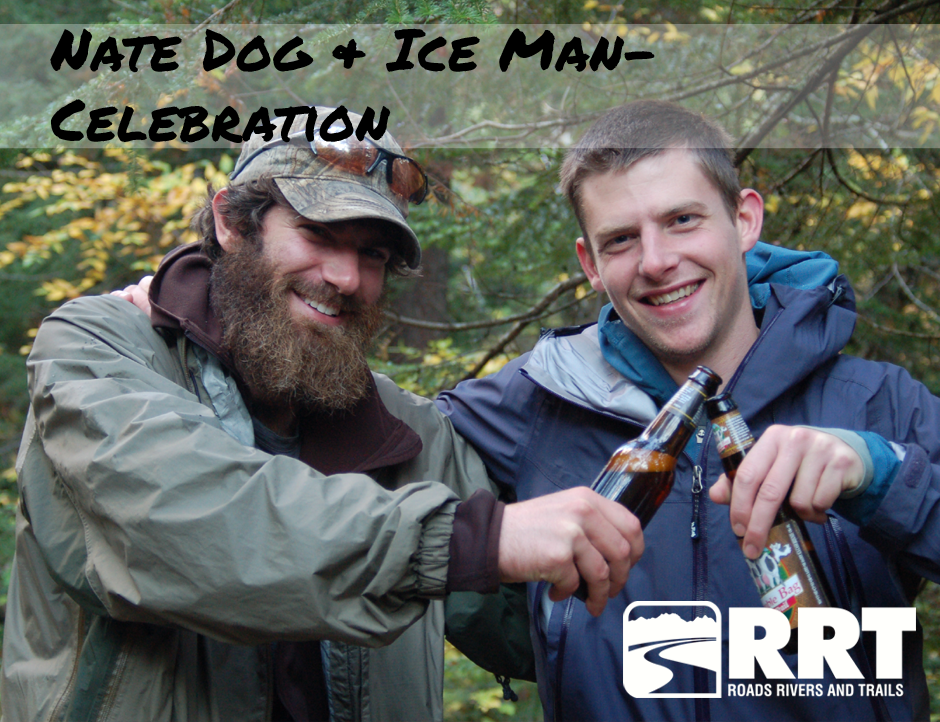 RRT
At The Core
Written by: Bryan Wolf

While business sense is the only thing that can keep the doors open, there is another reason that the doors were ever opened at all.  Getting those thoughts on paper ended up being extremely difficult.  I wanted to write about myself which is hard enough, but I also wanted to make it a piece that describes RRT. I wanted to share how our fates were intertwined this whole time. What I came up with is this:

In 2000, I had little interest in going outside, and less in extreme adventures. I don’t believe I had a grasp even on what it meant to go out in nature. It took just one instance; however, before I would blossom quickly into an adventure junkie. Looking back I think it was that limited exposure and poor understanding that made me thirst for more.  A direct exposure to something so beautiful, like tasting something so sweet for the first time, and forever craving it thereafter.  It goes to show that if you can just open someones eyes, they may be inspired to take it to all new levels.

A post high school graduation road trip would of never happened without trying to live up to my brother Rick’s wild side, in fact that mentality still gets me in trouble. My brother was in college at the time, and he was good at it.  I don’t just mean the grades,  I mean the experience. I realized I had never experienced anything quite the same way he does; to the fullest. I don’t remember hesitating when he invited me to cross the country with him, because at that crossroads, there was no real choice. With Rick and three perfect strangers we crossed the entire American landscape on our way to San Francisco.

Do you remember the first time that you took a deep breathe of fresh air and felt adventure filling your lungs? The people I was with, and those we would meet, allowed me to open up and pierce the shell I was hiding in all those years.  What I found when I came out of that shell was the most nurturing and addictive substance ever to be consumed by man, it was naturecrack (leezie 2011). It wasn’t the sights, the sights can be captured on high-definition television. You can try and witness all the beautiful sights of endless blue skies, deep red canyons, or towering white peaks though a TV. These are not just sights however, they are more a sense or emotion, and therefore can never be expressed or experienced on 72 inch plasma. Sharing the experience; that is the only way to understand or help anyone else understand what it feels like. The power of nature lies in every sense of your being.

I wanted to see the country’s wonders, I wanted my feet dangling from its deepest canyons, so I traveled on with old friends and with new. Each year I crossed parks, states, cities, and landmarks off my list.  It was early 2006 when I first realized for all the experience and check marks I still needed more.  It was my friend Joe that opened my eyes this time. Joe’s introduction to our wonderful world was much different than mine.  Through the scouts, Joe was brought up to always look for the longest lasting trip, the biggest craziest trip! I had been across the country with Joe already, so what was this big crazy trip? Shooting pool and making life lists was a regular occurrence for the two of us, and it was one of those fateful nights that a new idea was born. What if instead of a dozen places in a dozen days we had but just one goal in mind……for six months.  The plan was to be completely consumed in nature and to completely consume it, to have an experience that was not in passing but challenged our commitment and understanding of everything. A feeling came over me much like it did years earlier: I don’t remember hesitating when he invited me to hike the Appalachian Trail with him because once again, I don’t feel life gives us the luxury of hesitation. Hesitation can be associated with disappointment, at least with all decisions regarding stoplights and the Appalachian Trail.

Nature would be defined differently from that moment on and yet undefinable.  Adventure would hold new meaning but with it be as contradicting as the previous statement. Adventure is of course synonymous with high adrenaline activities, but this time I found it to equally stand for the peace and tranquility found in truly knowing the wilderness. Stillness and silence was an adventure like no other.  The store (RRT) was born on one of our very first days on Appalachian Trail in late 2006.  It started with a dream and a passion, the way all good things come to be. In the midst of one adventure we were constantly planning the next.  We thought about having our own place to call home, a hub for adventurous spirits with the goods and advice to create those adventures.  We couldn’t turn and open up shop then, but that idea would never fade. This experience we wanted shared on every platform that we could reach. We created a web site (the same one that hosts the store page now) and with it a blog and link to our photo journals while on the AT.  Beyond sharing with family and friends we wanted to reach a wider audience so we sought out media and were published in the Cincinnati Enquirer. Still, we wanted this trip to be big, and we wanted this thirst for adventure to spread so we decided to hike for a cause. On our 2,175 mile winter-journey we would raise $10,000 for the Make-A-Wish Foundation of Southwest Ohio. What I saw was an opportunity; this was our opportunity to turn what we were doing into something bigger than ourselves. As each of us make our way in life we fight to be and to do the best we can.  When we find our moment(s) however, we need to ask ourselves if we are making the very best of the situation? Don’t be satisfied with “good for one” if you can use that moment and turn it into something that is “great for all”.  This is a lesson that I hope to carry with me for life.

I would spend 170 days out on the Appalachian Trail, my first backpacking trip ever.  This trip showed me a million things about myself, but even more of the generosity and compassion that is in this world.  The trail is much like a fairy tale, many of stories seemingly impossible or at least unlikely this day in age.  It was all real, and like I promised myself, to the fullest.  While I expected answers to very specific questions, I received almost the exact opposite; I would learn answers to questions I hadn’t even thought to ask.  You don’t always need to solve a problem, you just need a better perspective on the situation.

That entire experience was rewarding in a million ways, and as addiction goes, I wanted more. Our next trip we tried a new charity “Hike for Haiti” as I attempted a barefoot hike through Vermont’s Green Mountains. Barefoot through nature teaches humility as well, as that trip ended prematurely. When we came home my feet had no time to soften from the sharp rocky trails before more sour news came; our adventure hub had closed its doors. Nature Outfitters, a base of not just gear but support that had been a Milford staple for 20 years, was gone!  There was only one logical thing to do at this point, open our own shop.  It was a phone call after one of my evening classes at UC from my cousin Emily that set things in motion.  Confidently Emily and Joe asked if I was in for another adventure, and being that we are all very optimistically stubborn the next chapter soon began.  In a haste of 20-hour workdays Joe, Emily, and myself , opened the doors of RRT, not 2 months after deciding to do so.  That dream we had on the AT several years back was going to be real!

Not a moment passes that we don’t feel blessed to be in the environment we are and doing what-it-is we’re doing here at RRT.  There are too few people in life that truly get to do what they are passionate about. It was late 2010 when we opened our doors, but I couldn’t help but to feel like there was 10 years leading-up to this day. My personal growth and never ending love for the outdoors needed a home base.  With like minded friends we had the opportunity to create just that. The original idea for RRT was actually a story telling, trip planning cafe, but Roads Rivers and Trails would become much more. Everyday I look for new adventures but also new ways to share them.  RRT was never created to be a retail giant, nor was it purchased as a retirement hobby: It was created from scratch and is an adventure unto itself.  For me, adventure exists year-in and year-out through Alaska back country trips and AT visits, but adventure is also in creating running groups, educating today’s youth, organizing presentations, and preparing people young-and-old for adventures of a lifetime. One of the very first lessons I learned, and the backbone of RRT, is that it’s about sharing the experience. Through this adventure I’ve been part of more adventures than one could dream, and although I’ve had my own summits and trails completions I can honestly say my greatest satisfaction is having been there when new friends have experienced their own.  Twice now I have reached the summit of Katahdin (plus two times on my own) and shared in the pure explosion of emotions from thru-hikers, acting as more of a spectator as they finish their crowning achievement. Teaching and then leading inner city kids from classroom to trail, I have seen strangers from different schools cooperate and explore together, often for the first time.  With each day the definition of adventure changes and grows to be more than I ever expected. RRT is a tool that we created: A tool that fuels adventure and drives passion. That is our business at it’s core; Our business is us. As the little guy in the market we don’t have command of supply chains, nor do we have extensive capital or corporate support, but what we found is that we don’t need those things to succeed.   In life and in business it seems it is never about the advantages that you have but the disadvantages that you overcome.  These lessons are often taught in nature, where self discovery and personal awareness last a lifetime. I challenge you all to escape to nature, even if right now you find yourself sitting at a desk.  Close your eyes, take a deep breath, and remember the first time that you let that adventurous spirit in. Let it fill your lungs once again.