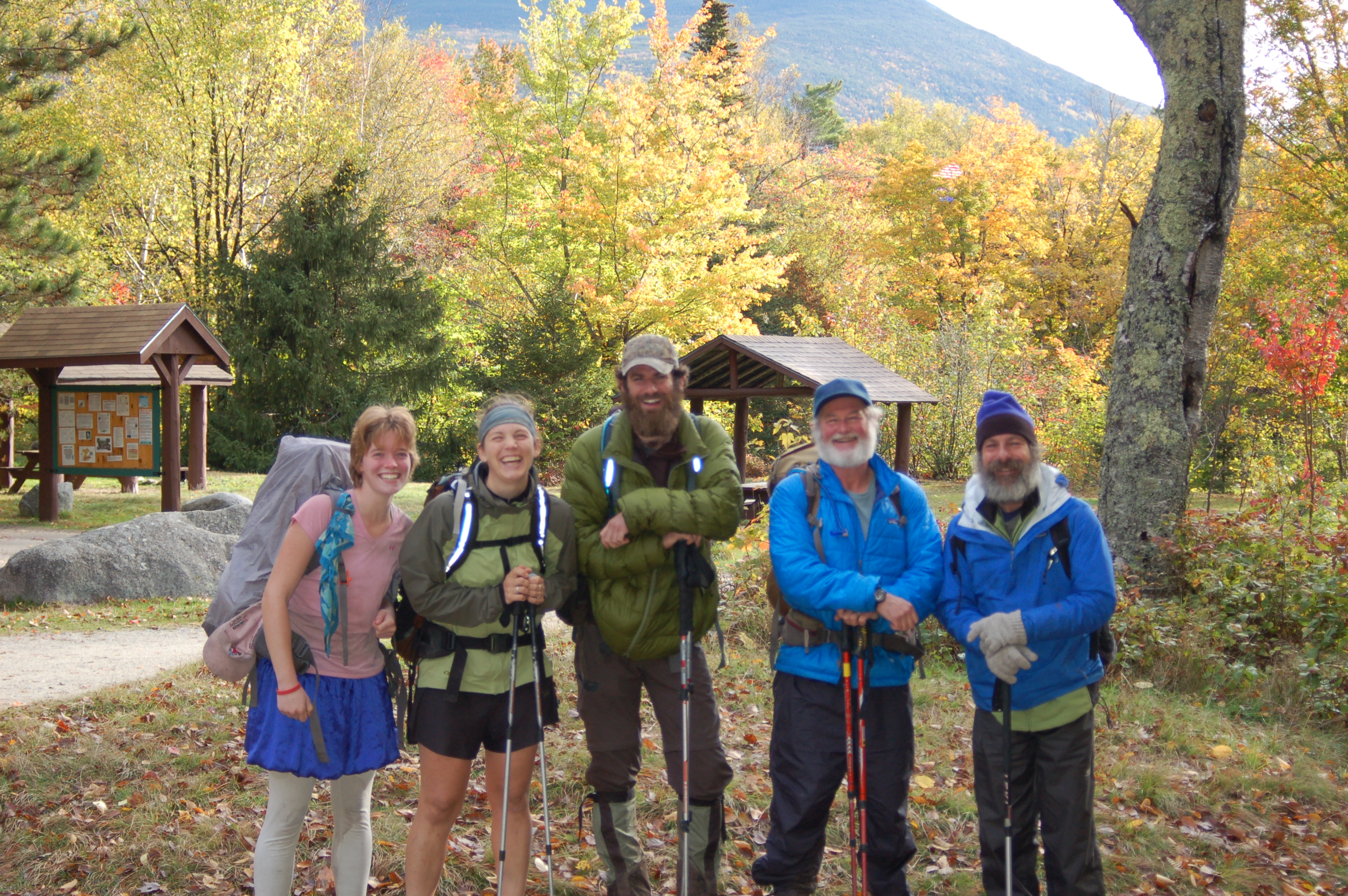 The Story Behind the Names

We are given titles at birth, and those names after many years seem to become us. Quite different than this is the way we get our trail names. We first must represent a quality and then own the name.

Popularized on the Appalachian Trail, and now adopted on many long distance hiking trails, it is customary to be given a new name, a trail name. The reasons for this can be many but, put simply you take on a new identity from that you which previously possessed and are renamed. Traditionally you are given the name while on the trail, and it is most often a funny representation of your personality as seen by others or a moment that has redefined you. There are no official rules however.

Over the past few years we have come across many AT hikers through the store and on the trail. We’ve reached out and asked them to briefly capture the story of who they became on the trail and how. We’ll update this blog occasionally with new entries. Enjoy.

Captain Blue, aka Andy Neikamp: “I got my trail name of “Captain Blue” on the Appalachian Trail in Georgia in May of 1994 while on a section hike. I was a 160-mile trip with a group of friends and did not have a trail name. On a rather cool evening, after a long day of hiking, I changed out of my hiking clothes and into warmer evening clothes. For some reason I was dressed in all blue clothing. My friends starting making fun of me. I wore blue long underwear, a blue fleece top, blue socks, blue gloves and a blue hat. They started to call me “Blueberry” like the fellow in the movie Willie Wonka. I did not want the trail name of Blueberry to stick so I quickly said “just call me Blue.” After thinking about it a moment I said “make that Captain Blue.” And the name Captain Blue has stuck ever since.”

Goatman, aka Craig Buckley: “It was a strange night in the Kentucky woods. Some friends and I sat on a ridge overlooking the gorge, telling ghost stories under a blood-red moon. Seriously. That’s what was happening. That’s how we get our jollies. We began discussing the possibility of an actual creature stalking us through the woods (modeled after, we found out later, the Pope Lick Goatman.) We all waited to hear his cloven hooves clambering up the sandstone, but never did. From then on, I would feel the Goatman’s presence whenever I entered wild spaces and realized, on my way to Maine, that perhaps the Goatman felt so near because he was inside of me, scratching and screaming to tear his way out of me and back onto his feral throne. This is all just a fancy way to say that I named myself because I didn’t want hippies to name me Lollipop or Mustard Shirt.”

Ice Man, aka Bryan Wolf: “On the trail I don’t need to use code names like “Bryan”. My trail friends except me for who I am and that includes my mutant abilities. I took on my trail name at the start of the AT, given by my hiking partner Joe. I decided that my first backpacking trip ever would be SOBO on the AT through winter (06′-07′). Mix together a jovial spirit, love for comics like that of X-Men, and the strange comfort derived from cold icy conditions and we both thought it was fitting that I was and now would officially be Ice Man.”

Shinbone, aka Eli Staggs: “Shinbone came after about 200 or so miles on the trail. I was complaining about everything that hurt so I was asked the question “what on you doesn’t hurt”. I replied my shinbones were doing pretty okay and there was my name.”

Leapfrog, aka Will Babb: “I got the name Leapfrog on my first day on the trail. My parents were hiking the first few miles of the AT with me, so I had to stop fairly often to wait for them to catch up. As I was hiking, I would pass another hiker named Turtle (he hikes slow). Each time I stopped to wait for my parents, he would pass me. We kept passing each other, “leapfrogging” each other for the rest of that day. At the end of the day, when I caught him for the last time, he said “hey Leapfrog” as I walked up to him. I stood there confused for a minute, looking around for somebody else he might be talking to, before realizing that he was giving me a trail name. The name has stuck and I’ve lived up to it plenty of times since then on the trail, “leapfrogging” people as I hike.

Karma, aka Kevin Jones: “After hiking with strangers for a couple of weeks we had many of conversations. Several felt that I had a lot of “Good Karma” in me. I shortened it to “Karma” to keep people guessing if it was representative of good or bad karma. The name has followed me ever since across many of trails, jobs, and locations. The name and trail will always be a big part of my life.”

Love and Ditto aka Audrey Greene and Dylan Price: “At the end of long days of hiking, before making it to camp, the combination of exhaustion and low blood sugar often caused Audrey and Dylan to bicker with one another. One afternoon, after arguing about something silly, Dylan (not ready to say the words “I love you”), uttered the word “love.” Audrey, sharing the sentiment, but still feeling hangry responded with “ditto,” and then the trail names Love and Ditto were born.”

Siesta, aka Chris Landers: “Starting the PCT on 7/4/16 I found out quickly that the days are very very long. With that being said I knew I wouldn’t hike sun up to sun down (4am to 10pm). So I would often find a warm and dry place in the sun, under a few pine bows or against a large wind blocking tree trunk to get off my feet for a bit. I would take several breaks like this every day. After hikers started noticing this they began to chatter about how I took naps in some pretty weird places throughout the day. So one night around the campfire with friends the topic arose about my napping habits and I was given my trail name.”

Natedawg, aka Nathan Hankins: “Really I just couldn’t shake the name. After the fifth person tried to name me Natedawg I just gave in and accepted it as my trail name. Just was peoples natural response to me.”

Guinness, aka Katie Moser: “I was constantly wearing a lot of black, mostly because women’s outdoor clothing just didn’t seem to have fun colors at the time. I had to turn down some trail names like Ninja, Newspaper, and Penguin. When people found out I also enjoyed darker beers like Porters it was settled, Guinness it was.”

Archer, aka Erik Weekman: “I was playing cards with a few hikers and we were trying to distract each other as much as possible since the game required concentration. I had to think of something fast so I did some kind of high pitched laugh/ cackle, and one of the hikers not playing peeked into the shelter and said “was that a Hyena? That sounded like a hyena.” That’s how I got my first trail name, Hyena. Later in the trail, I was sitting around a fire talking with other hikers about TV shows we liked, and we were all throwing out quotes from shows. The ones I remembered were from the show “Archer” and I had everybody rolling around on the ground laughing. Eventually one guy caught his breath enough to say, “that’s your new name.”

Early Bird, aka Brian Senez: “I started my southbound thru-hike late in the season in September.  While my friends and family were very supportive many others expressed concerns that it would not be possible for me to complete the trail.  This was my first long distance hike and I was both motivated and determined to accomplish my goals.  My trail name references my love of predawn starts.  Every morning I awoke with excitement around 4:00am energized and ready to climb some mountains.  It soon became apparent that I much preferred hiking before sunrise and having a few hours to relax in the evening rather than hiking into the night and doing evening chores in the dark.  This routine was unusual and stood out from most other hikers on the trail.”

Barbarosa, aka James Robinson: “My second day on the AT in 2013 i got the name Barbarosa after the German emperor of the third crusade. The name means big red beard. I got it because I already had a full beard when everyone else was still scruffy.”

Fetch, aka Ben Read:  “I got my trail name given to me by my real life partner and hiking partner, Tipsy (that’s a whole other story right there) in the first few hundred miles of our NOBO hike.  When we set out on the hike I had quite a few more miles under my belt and would say I was more prepared from an endurance standpoint while my longer legs gave me a quick pace.  Of course, it didn’t take long before she was out hiking me though!  Anyway, I began to hike ahead and bounce all around to see what the next half mile of trail had in store, to see whose voices we could hear up the trail belonged to, to get water, to find a campsite, etc.…  And there you have it, Fetch… as in go and fetch,  it’s a natural fit.  Funny thing though, Tipsy and I never called each other by our trail name during the hike.”

So next time you take a walk about town just think about who you pass. They may not be an Andy or Katie like you expect, you’re walking among the Captain Blue’s and Guinness’s of the world and you don’t even know it!

For a look into the psychology of trail names I found this blog humorous: Psychology of a Trail Name