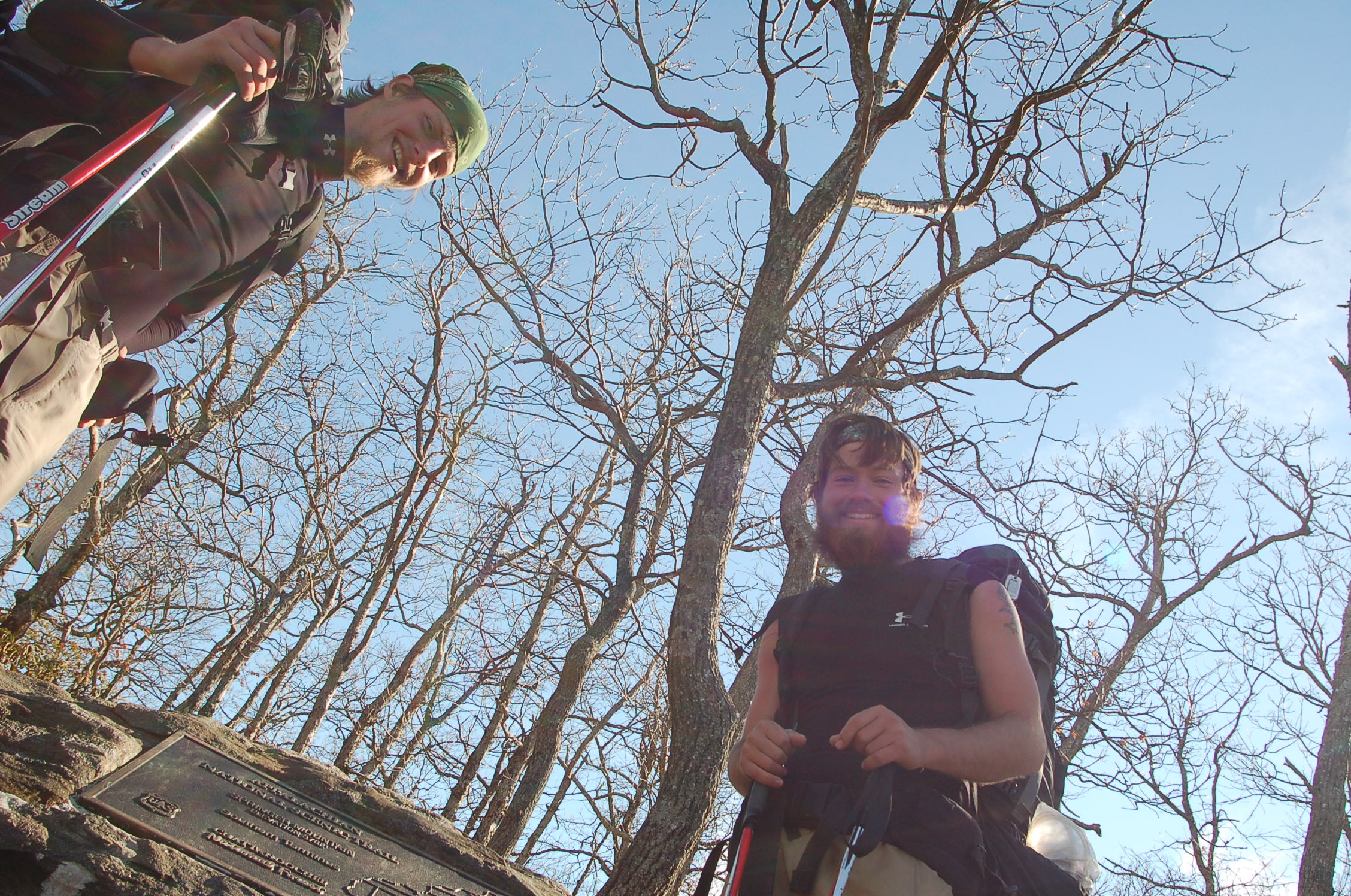 Our 1st day out of Franklin was cold and the trail was covered with a fresh dusting of snow. Parts of the trail were still pretty icy too. Ice Man took a bad fall on some ice and bumped his head. He had a bad earache for a while. I hadn’t seen him take a fall like that since Maine. At the shelter that night, we stayed with a north-bounder named “Music Man”. It warmed up a little bit the following day as we crossed into Georgia. The trail dramatically changed as we crossed the border to Georgia, a lot smoother.

Over the next couple days the weather jumped to the 60s. We were lucky to dodge the rain and thunderstorms that were supposed to hit. We had some of the most beautiful weather in a long time. I even cut the sleeves off my shirt. We finally made it down to Neel’s Gap. Its about 30 miles from Springer and the trail runs next to an outfitter and hiker bunkhouse. This is the spot most North-bound thru-hikers decide that the trail isn’t for them and go home. We stayed the night and resupplied there for our last day and a half. The outfitter treated us to a free pint of Ben & Jerry’s ice cream, delicious.

We had 23 miles to do before our next shelter, but that didn’t stop us from taking a 3 hour break to enjoy our last great overlook. The sun was blasting all day without a cloud in the sky. There was a nice breeze going on though. It couldn’t have been better. Ice Man thinks I am crazy, but I could swear I could smell the ocean even though we were far from it. While we were enjoying the overlook a couple out on a day hike stopped to enjoy the same view. They treated us to some wine and good conversation, nice trail magic. We passed more than a dozen north-bounders and we sat down to talk with a few for an hour or so. Some are so excited to be there and others are already doubting themselves. They have great journeys ahead of them. We hiked into the sunset and a couple hours into the night. As the sun was setting, we could see the skyscrapers of Atlanta in the horizon. The stars were out in full force, what a great way to finish up the trip.

We thought we wouldn’t be able to sleep, being our last night in the shelter, but it ended up being like any other night. After hot chocolate, we were out. We were up at sunrise and bidding farewell to the other hikers at the shelter. It was a weird, yet exciting feeling as we put each step behind us, getting us that much closer to Springer. It was a beautiful hike along Stover Creek, which was surrounded by virgin hemlocks and rhododendron. The trail was smooth and the climb was nothing compared to Katahdin. They shouldn’t even be related. Some of our family met us a mile before the summit and joined us for the last mile. It was great to share the experience with them. We even had the opportunity to show them the shelter on top of springer. I have never felt so accomplished and whole as I did when I touched the last white blaze. I have never been so proud of anyone as I am of Ice Man. The family jokes of me helping him get here, but I couldn’t have done it without him.

It was a mile back to the cars and a long road home, haha long… not for a car and my brother behind the wheel. Once back to Cincinnati, we warmed up our cars and headed out to Skyline for 3-ways and cheese coneys. What a treat. Before the night was over, I stopped up at Mt. Adams to see the city. That makes it final…. The boys are back in town.  Thanks to everyone for all their support along the way.

There may never again be such a great sense of accomplishment and meaning. The trail above all else teaches you patience, confidence, and resilience. There are many great adventures in life but there was one great adventure that gave us the courage to go after all others. What gave us the courage to chase this dream? In retrospect I think it was blind ambition, but in the process you can learn a great deal of not just yourself but also of this world. I’ve said it already but the people and personality of this trail are unreal and unlike anything you would expect or imagine. The experience  became one of personal but also cultural enlightenment exposing us to the heart of America.

The Appalachian Trail is in large responsible for us being who we are. As an outfitter we are here to carry on the kindness of our trail angels and be trail angels ourselves. Even if we are in Cincinnati we have found that we can make a big impact and help a great deal with people’s lives through experiences with the AT and other trails. The trail lives on in us both, through presentations, shop conversations, and countless revisits of the trail itself.  The only question left unanswered is the one most asked; “Would you do it again?”.

There are many more adventures in our future, with many places and people to experience it with. That being said, we all get “Springer Fever”….

Thanks for following, and a special thanks to all those that helped us along the way. A special thank you to our parents and biggest supporters in all life endeavors, love you!