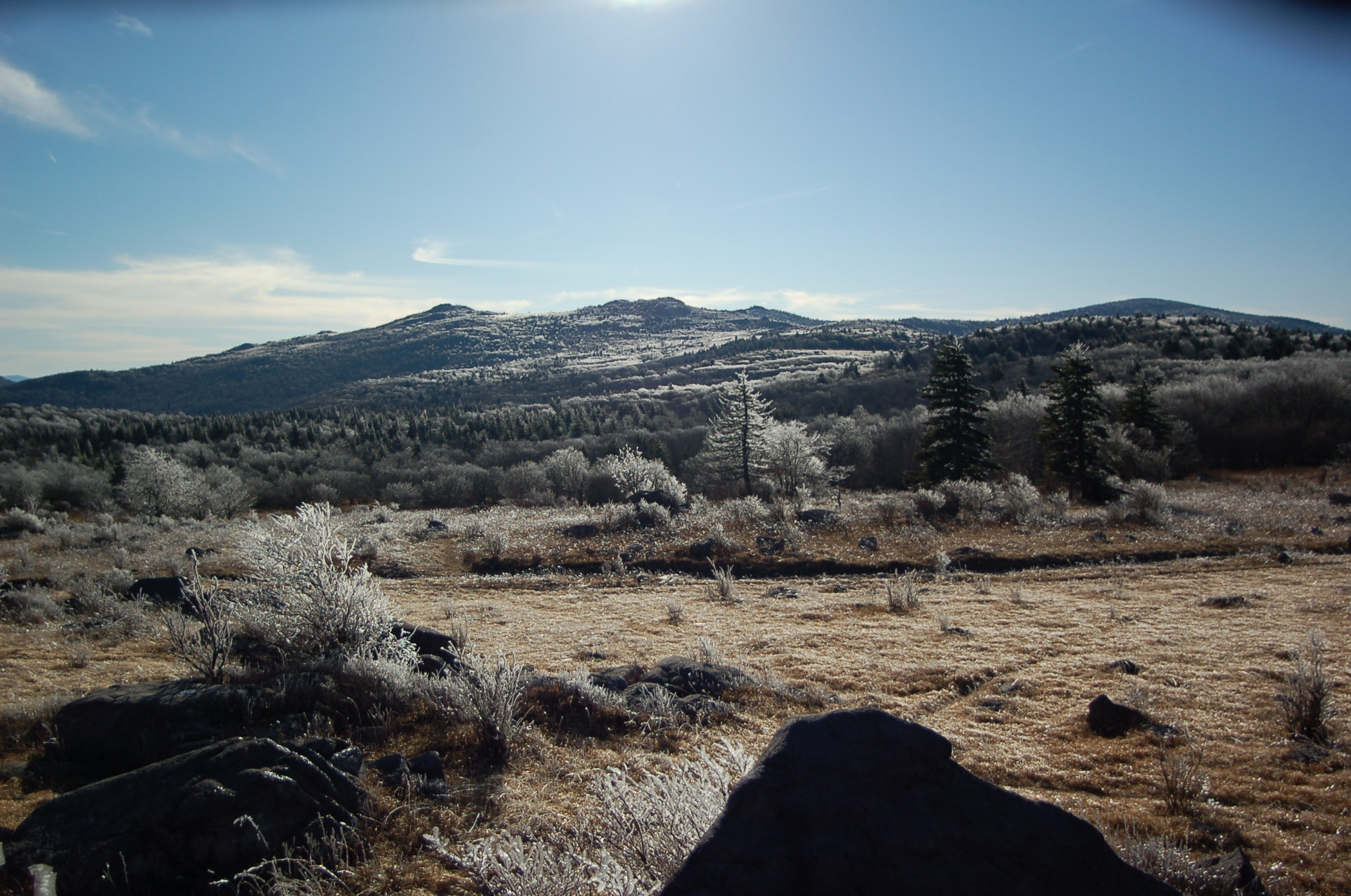 Our first day out of Pearisburg wasn’t too bad. We started going through the “green tunnel”, which is where the trail passes through dense rhododendron thickets. I love it when the stream flows next to the tunnel and its all misty. It makes me feel like we are in the rain forest at the zoo. The tunnel continued the following day, which led us down a side trail to Dismal Falls. They were so sweet, but we couldn’t stay there forever. We were pushing out 26 miles to meet up with my friend Marc. We only had to hike 30 minutes into the night, but we were worn out. The last mile was along the road, and as we were hiking, two hound dogs came out of the woods and stayed by our side until we met with Marc. It was fun, but we had to keep yelling at them to get out of traffic.

We stayed in town with Marc that night and we went over the plans for while he was here. He brought us our mail drop and some new trekking poles to try out. It was tough to switch out our sticks for the trekking poles, but they ended up working really well. The hitch out of town the next day took forever. It wasn’t until we just started walking back to the trail, when someone picked us up. The first half of the day went smooth, a good break in for “sky watcher”. It didn’t last though. We had problems crossing rivers and bush whacking back to the trail. The second half of the day was miserable. To top it off, I had a mouse run across my face that night. It was gross.

We took a lunch break on the edge of some cliffs on top of Garden Mountain. The views were great, but it was a little windy. When I started to get cold, I reached for my jacket and it had been blown off the cliff. I couldn’t believe it. Luckily, it didn’t land in a tree because I was able to find a way to climb down. The weather started to turn that afternoon and night. We stayed in a sweet fully enclosed shelter on top of Chestnut Ridge. The following morning there was snow on the ground and ice on all the grass in the fields. It was cold, but a pretty sight. That night was a long one. It got down to 15 degrees. We had to sleep with everything. It was colder than what we were expecting to get.

We stayed in Atkins the next night to get warm and dry out. On the way in, we watched the sunset over the fields. The shelter was the most exciting part of the following day. It sat behind the Mt. Rogers Visitors Center and we could have pizza delivered to the parking lot and buy sodas for the vending machine. It was suppose to be in the 20s overnight, but the enclosed loft of the shelter kept us above freezing. It makes such a difference. In the morning, we were sad to see sky watcher calling for a ride to get back to his car. We completely understand his reasons and know now the weather didn’t get any better.

The hike to the next shelter was nothing to scream about, but we were in for a treat. It was a stone shelter with a fireplace between the bunks and someone had stocked up the shelter with dry firewood. We hung a tarp over the front of the shelter to block the wind and built a fire. We kept it going all night and it kept us really warm. Even though it was 17 outside, it was 40 inside, perfect. We pushed 25 miles over Pine Mountain and the Highlands around Mt. Rogers. We were mostly exposed above 5000ft for most of the hike, so the views were incredible. We got to see lots of wild ponies on the Highlands. Its amazing they can withstand the winters up there. The night hike took forever, but that’s mostly because I couldn’t stop looking at the moon and stars.

We woke up to a dusting of snow and freezing rain. Within a few minutes crossing the open fields, we were covered in ice and so was the trail. Luckily, those silly trekking poles have a removable boot with a spike underneath to help in icy conditions. Once we were below tree line, the winds weren’t so bad, but the trail kept going out into open fields. For the first 8 miles we were fighting 60 mph winds, freezing rain and an icy trail. With windchill, it was below zero easy in those exposed areas. We just kept pushing for treeline and lower elevations. We finally climbed down to 3000ft and the trail improved, but ice chunks kept raining from tree branches. We were able to remove the sheets of ice from our packs and clothing. We cut the day short when we made it to the shelter.

Yesterday morning wasn’t so bad getting into town. Most of it was hiking along on old railroad bed that followed a stream all the way into town. The trail goes right through town. Subway was only a few hundred feet away. We stayed at the Lazy Fox Inn last night, and gorged on some pizza. Mrs. Adams, an 82 yr old woman takes care of the place, and she made us a humongous breakfast this morning. There was eggs, grits, hash browns, apple turnovers, pancakes, bacon, sausage, cinnamon apple slices, and fruit plate. We had to lay down for 2 hours afterwards. Now were are finishing up here at the library and in a little while, we will be crossing over into Tennessee, the 12th state. We are getting so close.

Between some severe weather and blistered feet Marc had to take a break but we’ll meet up with him later on again. This section is my absolute favorite section of the southern half. I’ve been back to Mt. Rogers area now several times to hike with the ponies. Marc’s surprise gift of trekking poles was an awesome one and our wood sticks had convinced us enough of their purpose. That was the real moment when we realized the difference and appreciated how much a trekking pole helps, especially on with a handle, metal tip, sized height, and durable build.

Leaving the shelter on Mt. Rogers and backpacking some of the balds in the area was probably the closest we had come to white out conditions. as always this made things exciting for us but challenging as well. The snow covered trail and blazes meant that we really needed to have that second sense about where we were going.  There was but one mistake, and of course Joe didn’t mention it in the above post. Along one of the balds we had lost the path and it seemed nearly any direction could work.  We begin to descend and Joe pointed me down a steeper trench. He didn’t follow too close and I noticed that when I was about 20 feet down the mountain side he was staying up top. I turned back and had him help pull me back up concluding that that was for sure not the trail we were looking for. I’m not convinced that he wasn’t trying to kill me…

We revisit Damascus, one of the more notorious trail towns, often for trail days; an AT celebration. The town is fantastic and of course hiker friendly. That was to date still the largest and best breakfast ever!