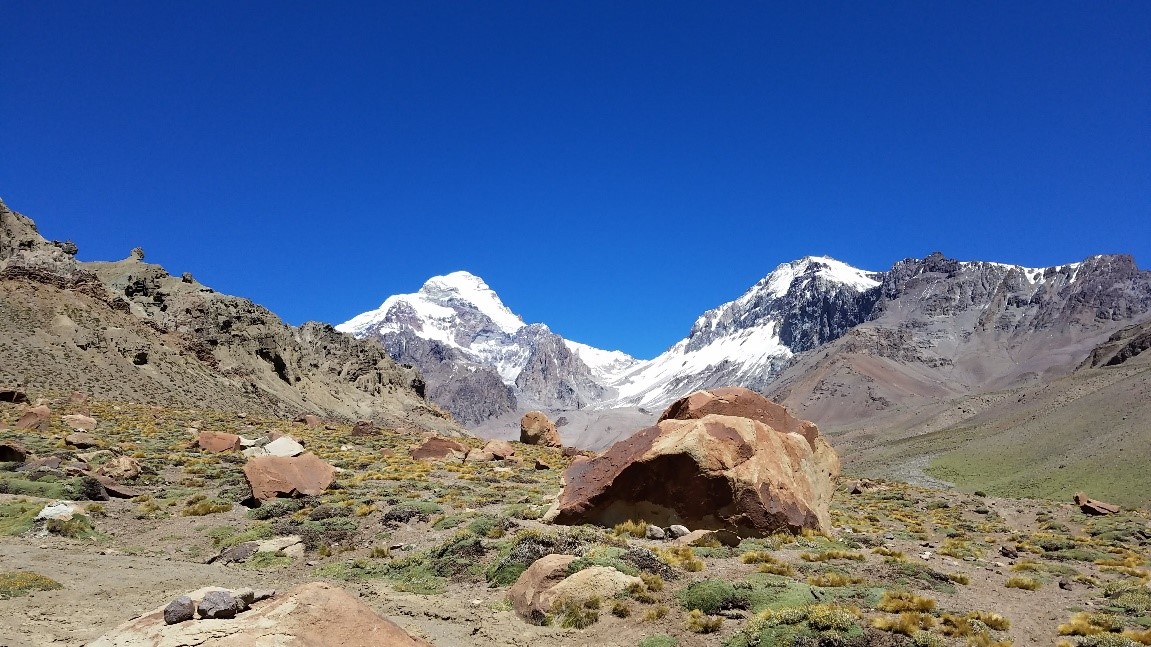 After the Climb – Aconcagua

There is no protocol to the return of society after a month in the mountains. The transition is not easy, and never will be. Aconcagua, the Andes Mountains, and Argentina seem like a distant dream. Shout out to Alpine Ascents and Argentina Mountain Guides for making that dream come to life. More specifically our guides: Jangbu, Bettiana, and Bryce, without your expertise and knowledge this trip would not have been possible. Thank you for providing consistent communication, keeping us safe, comfortable, and well fed. Where do I start to explain this epic adventure? I suppose the beginning, in Mendoza.

Upon arrival, Bryce picked us up from the airport and transported us and our gear to the Hyatt. There we met the team, checked our gear, discussed the map and expectations for the days to come. They say you eat your way up the mountains, and that is exactly what we did. We feasted and toasted libations to a successful climb. The following day we picked up permits at the parks office and took a bus to the town of Los Penitentes, about two and half hours northwest of Mendoza. Highly suggest Hotel Ayelen, the lodge we stayed at the night before our trek to basecamp. It is about a 15-minute drive away from the trail head, the food is amazing, Steve (the owner) is a hoot, and he keeps the best candy at his desk. Finally, we checked in the next morning at the ranger station of Punta de Vacas, ready for the journey that was ahead. Punta de Vacas trail head and ranger station in the background. We look so fresh and ready to walk.

The Vacas Valley is one of the most beautiful glacial carved valleys I’ve had the pleasure to stomp through. We followed the rightfully named Vacas River for two days. Our trekking packs were light (~25 lbs) thanks to the Arrieros or Argentinian cowboys and their mules. In duffels they strapped our expedition and group gear to the ungulate’s backs then rallied them up the mountains. It was incredible to watch how easily those beasts made it up the steep and unstable terrain. At the end of the second day we got our first glimpse of the Aconcagua.

The third day trekking into basecamp, we crossed the Vacas River into the Relinchos Valley, and were able to watch Aconcagua grow bigger as we approached Plaza Argentina or basecamp. From there we lost sight of the summit, because we were on the back side of the mountain. Each expedition team is expected to come up with a name before arrival to basecamp. This is where the expedition began for team Vertical Chorizo. Blue skies and amazing weather in the Vacas Valley. Arrieros wrangling their mules, and our gear, up the mountain. Aconcagua, how stunning is that mountain? Basecamp is pretty much a party and straight luxury. There are fixed tents, people that stay there the entire season preparing food for climbers, porters carrying gear for a hefty chunk of change, a doctor to assess climbers as they hope to ascend to higher altitudes and bag Aconcagua’s summit, a bar, wi-fi for purchase, electricity (solar), and hot showers again for purchase. We stayed at basecamp for four days. We played cards, ate delicious foods, told jokes, shared many laughs and simply acclimated to the higher elevation we were at. The cache day to camp one was difficult with my heavy expedition gear, but felt great to move up the mountain. Coming back down, realizing the scale of this mountain was breath taking. After a rest day, and some snow flurries that swirled through, we were ready to move to camp one and start ascending to higher camps leaving the luxury of basecamp below. Decent after the cache day, being able to see the entire camp surrounded by peaks.

The higher camps blur together and this is where the dream began. A lot of rest steps, pressure breaths and looking down at my feet, taking it one step at a time and one breath at a time. Camp one was situated at 16,300 ft. underneath Maria’s Peak. We decided to name camp one camp Maria, considering it was the only one without a name, after our Maria and the peak it was underneath. Here we encountered the iconic penitents, however their abundance was very low this year. The winds were fierce. To kill time, we played games like throw rocks in a circle for points, of course Jangbu won every time. Go figure he is magic.

We cached our group gear and things not in use at camp Guanacos. To get there we traversed beyond the northside of Ameghino Col, Aconcagua’s sister peak. The camp is located at 18,200 ft and overlooks the Guanacos Valley, a wilderness preserve off limits to humans. We went back down to camp one, had a rest day, then made the move to camp Guanacos. Cache and move to high camp, or camp Colera followed the same formula of hike high, camp low. We moved everything up to Colera that we weren’t using, then went back down to Guanacos. That night at Guanacos before the final move, we had a discussion of the summit and how our window was slim due to high winds. January 28th was our day, and we were given the expectations.

Camp Maria and the view from our campsite. The things you do for fun on a windy, mountain day. Throw rocks into circles. Views while trekking to Camp Guanacos. Eating dinner at Camp Guanacos and discussing summit day following our move to Camp Colera the next day.

The move to camp Colera went smoothly. It was an early night considering we had a 4:00am wake up to begin moving at 6:00am to arrive at the summit within a reasonable time frame. The stars and sunrise that morning were incredible. The route ascended to the white rocks, first break, up to the North ridge of Independencia, second break, traverse the west face, then to the caves (canaleta) where we took a nice long break at 21,000 ish feet. This is where I started to feel nausea from altitude, and being a part of the expedition had to express my concerns to continue with the entire group. I ingested some medicine to help and we continued going up and up to summit ridge. Unfortunately, on summit ridge, at 22,470 feet I stopped my attempt at the summit due to 2 more symptoms of AMS, vomiting and a headache in addition to my nausea.

Responsible decisions are always hard and I try not to be discontent over the failed attempt. At 400 feet shy of the summit I stopped, high fived all my Chorizitos as they passed and bid them good luck as they ascended further to finally summit. I was close enough to watch them make the final push. Bryce babysat me as I failed to keep down water, and we waited for Bettiana to come back down so she could escort me off the mountain, and he could make his first summit on Aconcagua. The decent was long and tiresome, remember the summit is only half way. Eventually, we made it back down to camp Colera around 6:00pm. The rest of the Vertical Chorizo team arrived back around 8:00pm, exhausted and ready for sleep. Vertical Chorizos at the summit! I’m there in spirit. Where I ended my summit push. If you zoom in closely to the summit, you can see my team climbing up the final leg. It was such a clear day, I could hear them celebrate at the top (Kara’s voice mainly). Camp Colera, looking to the left is Chile, to the right is Argentina. 19,500 feet of pure bliss or maybe lack of oxygen.

The decent to Plaza de Mulas was hard. 6,000 feet over 12 miles, if I remember correctly. Knees wobbly, lacking nutrients from my body rejecting everything the day before, I wanted to just fall and tumble down the rest of the angular scree. Moral of the story is we made it safely down to the other basecamp and were back to the luxuries associated with it, cheese burgers waiting for us and all. We sorted our expedition gear for the mules and transitioned back to our light weight trekking packs. From this basecamp you can see Aconcagua and all her glory. The next morning, we woke up and started the magnificent hike out of the Horcones Valley. A bitter sweet, 18 mile, farewell to the mountain we considered home for the last 16 days. Together we walked arms linked stepping from trail to pavement for what seemed like the first time, celebrating the fact that we made it. Aconcagua on fire as the sun is setting. Trekking out of the Horcones Valley. Looking back at the beautiful mountain we just climbed. Friends crossing the boundaries between nature and civilization. Amazed at the accomplishment we just made, together.

We are back in civilization, now. Sunburnt, smiley, and relatively clean we took on the city of Mendoza for four days, considering no use of the foul weather days built into our itinerary. I went to climb a large mountain and came home with countless memories, a new perspective on life, and 12 new special friends. Eagerly awaiting our next reunion for adventure, as it is always waiting. Our “final” dinner together, celebrating success and good health.