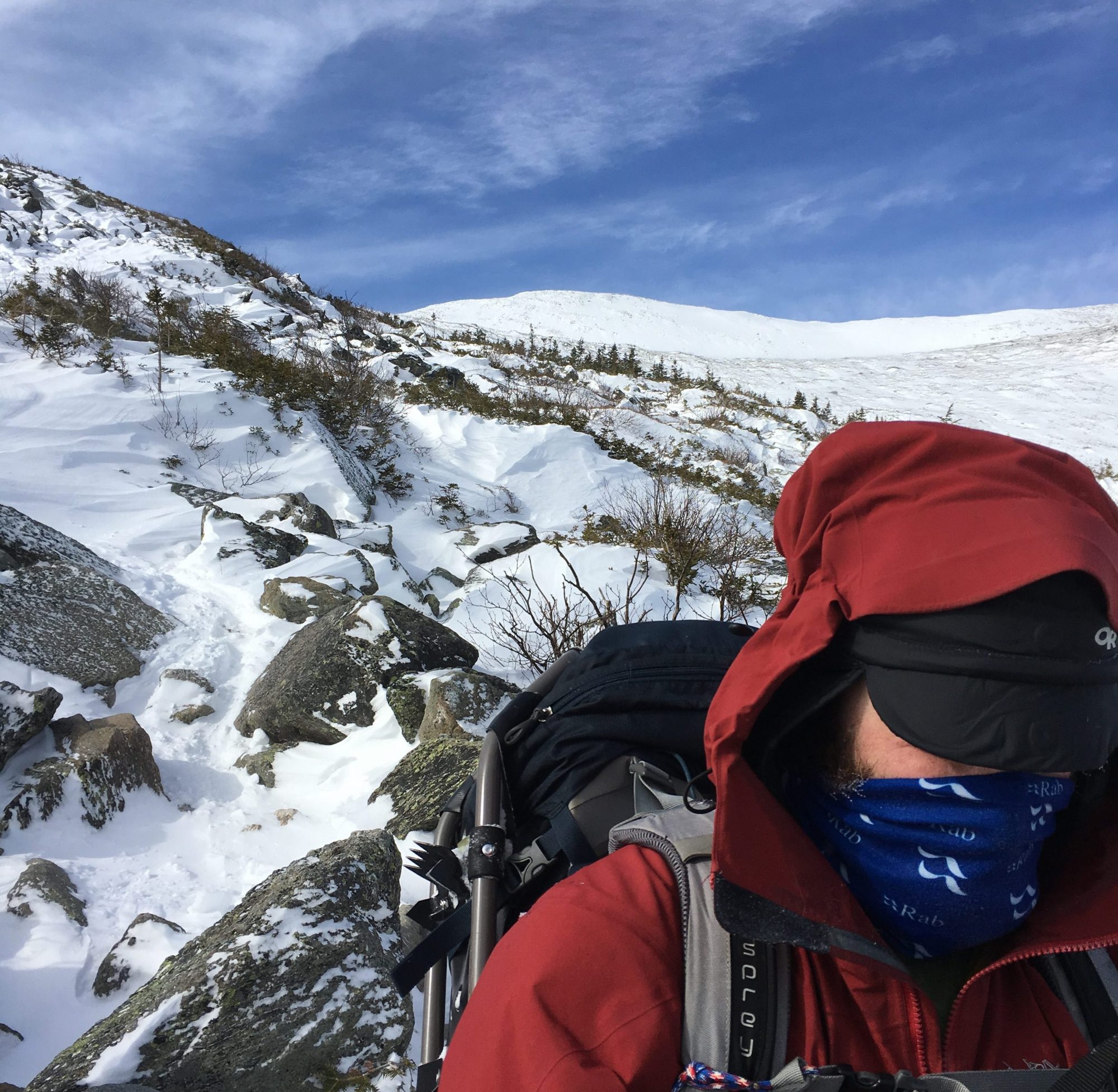 Bryan and myself recently returned from a winter ascent of Mt. Washington (wiki link).  Known for having some of the worst weather in North America and the fastest recorded wind speed ever, the highest peak in New Hampshire’s reputation stands much higher than its actual elevation of 6,288 feet. Having done some winter mountaineering out west prior to this trip, I never thought much of it. How demanding could a mountain under half the elevation of Colorado’s highest peak be?  Fairly demanding it turns out.

We departed Cincinnati at 5:30am on Tuesday, February 6.  Groggy, and excited to be on the road, we started off with a few podcasts in a futile attempt to keep our minds occupied during the ‘too early for conversation’ hours of the morning.  Bryan drove for the first six hours through light snow and fog.  We started calling his wife’s Honda Accord the Magic Carpet since every time one of us looked at the gas gauge, it appeared that it hadn’t moved. And yes, we borrowed his wife’s car because neither of ours will make it confidently out of the tri-state area. I’m curious to find out when the stench of four of the most outrageously smelly feet attached to ankles will finally dissipate to a tolerable level in that Magic Carpet. Sorry Laura…

After paying our tolls through Pennsylvania we passed through a small portion of New York, through Hartford, around Boston, and up into New Hampshire.  Tuesday night was spent in great company at the friend of a friend’s cabin on the shores of Lake Winnipesaukee. Going over maps and forecasts at the dinner table while exchanging stories reminded me that the feeling of home has a lot to do with the company kept there, and the cabin quickly felt comfortable and warm. The view the following morning was incredible, and I can only imagine the good times had on the lake both winter and summer.  In fact, Wednesday morning a brave soul driving a Chevy Silverado went barreling across the frozen surface of the lake, presumably to an ice fishing shack, at a speed indicative of their lack of confidence in the thickness of the ice.

Bryan and myself were eager to get closer to Mt. Washington and decided that with the impending snow storm, reaching Harvard cabin (Harvard cabin website) early Wednesday afternoon would be the best course of action.  Snow began to fall just as we lost cell phone reception on the drive into the Pinkham Notch Visitor Center.  It didn’t stop for the next twelve hours.  Our hosts from the night before accompanied us on the snowshoe hike up to Harvard cabin and then turned back to the vehicles, leaving Bryan and me to enjoy the 14-degree cabin, soaking wet from the steep hike up Huntington Ravine Trail.  We began building the fire promptly at 3:55 joking about how rebellious both of us were being for ‘ignoring’ the sign hung discreetly and directly over the wood burning stove saying that no fire shalt be built prior to 4pm.  The fire gods would punish us immediately for our haste.  The cabin filled rapidly with wood smoke, to the point of me opening the doors, fearing smoke inhalation issues.  Later that evening, a caretaker from the Hermit Lake cabin stopped by to check on the cabin. Upon walking in her only greeting was “Holyshit, you guys have clearly never seen a wood burning stove before”, and then demonstrated how not to kill everyone from asphyxiation overnight.

Five other men joined us in the cabin Wednesday night, two from Atlanta, their guide, and two hardcore skiers from Canada.  Like camp in forty below zero with a smile kind of hardcore.  We had a couple beers and entertained each other with stories of past travels to the hills and some goals we had for future adventures.  I could tell Bryan was getting tired, sitting quietly with a beer in hand is a sure sign of his exhaustion. As for myself, I wasn’t far behind.  Being lulled to sleep by the wind in a 65-degree cabin is not a difficult thing to do.  The guide and his two clients rose at 6am and were out the door by 7.  Bryan and I opted for a later start time to avoid the high winds in the morning forecast. At 10 below zero Fahrenheit, with a 50mph wind, any exposed skin would be frostbitten in 10 minutes.  It feels as if Mother Nature is trying to cut capicola ham from the flesh of your cheeks, under the bottom edge of the sunglass lens, and above the top of the buff protecting your nose and lips.

While the normal winter route isn’t very difficult, little more than a walk up past the Lion’s Head feature and on to the summit cone, the cold and wind are relentless. We left the cabin at 10:30am and snowshoed as far as we could before we put on our crampons. I stopped above Bryan on the slope and repeatedly pushed fresh powdery snow that had accumulated the night before down onto him and his pack.  Only one of us found this lightly entertaining.  Shortly after the crampon comedy we ascended a steep section of trail where both piolet and crampons are required. This section was quite fun and reminded me of how much I enjoyed climbing ice a few years ago in Colorado.  The next bit of trail extends up through the tree line, where the wind really picked up and leads to an outcrop of large rocks supposedly resembling the head of a lion. Neither of us saw the resemblance but the outcrop was impressive in its own right.

From here you can see the summit and exhaust pipes of the weather observatory, the current one taking weather readings every day since 1932.  Mt Washington is the first mountain I’ve summited that the summit looked as far away as it actually was.  No deception here.  2 miles give or take and 2 hours of biting winds and bitter cold.  Honestly it wouldn’t have taken quite as long had it not been for a cleverly placed cairn, on the far corner of a steep snow field that we both failed to see.  Instead we opted to follow two skiers and their skins tracks across the Alpine Gardens, post holing the ENTIRE way, and then up a very steep snow field about 200 meters from the proper route.  Several times along this poor choice of a route we stopped to laugh and take in the discomfort that our lack of observation skills had brought us.  Discomfort would have found us either way. Blaming ourselves only took the attention off the wind cutting our faces and the steepness of the snow field.

We reached the summit at 2:30 Thursday afternoon, and a goal that’s been on my mind for three years had been accomplished.  Both of us were pretty spent by the time we summited.  I had to cajole Bryan the last 400 feet to the top and that was about all that kept me going.  There is a familiar and exotic feeling about being above the clouds, on the highest point in sight in any direction.  Explaining it is difficult.  I tend to get a bit emotional and existential when standing atop a summit.  Why did I come here?  Why would anyone come here?  Is this what an outsiders’ perspective of Earth would look like? It’s so cold. I’m so tired.  My face hurts.

Starting down is an exercise of patience for me. I want to stay at the top to admire the beauty.  The cold convinces me otherwise.  Knees protest the increased force of gravity.  Crampons pierce the fabric of my softshell pants and I stumble several paces forward, cursing loudly at my own coordination. Attention to detail must be at an elevated level.  My attention descended faster than my feet.

There are two other options to ascend to the summit and both require more technical skills than Bryan or myself currently have; however, after this trip I hope to become confident in those skills to climb the Ravines next winter.

We make it back down to the cabin at 4:30, after two hours of walking and glissading and laughing hysterically from the joy of sledding down the hill on our butts, trying to stop before colliding with an unfortunately placed rock or tree.  Once back inside the safety of the cabin we got the fire roaring and the interior heated up to 70 degrees by the time the second of our three dinners had been devoured (about an hour). I will absolutely have a wood burning stove in the house I build someday.