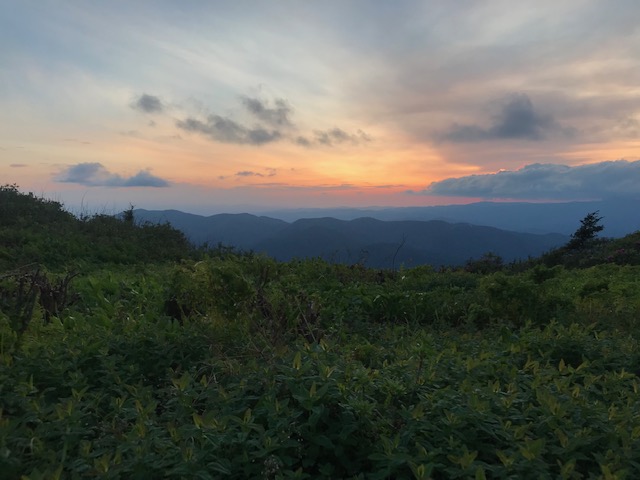 If you’ve been following RRT for the past few years, you have probably heard about the Black Mountain Crest Trail (BMCT).  My good friend Will wrote about his attempt in 2019, and I talked about it during one of our Campfire Story segments in 2020. If you heard the campfire story, then you know my first attempt on the Black Mountain Crest Trail did not end successfully but as a slow trudge with a heavy heart. 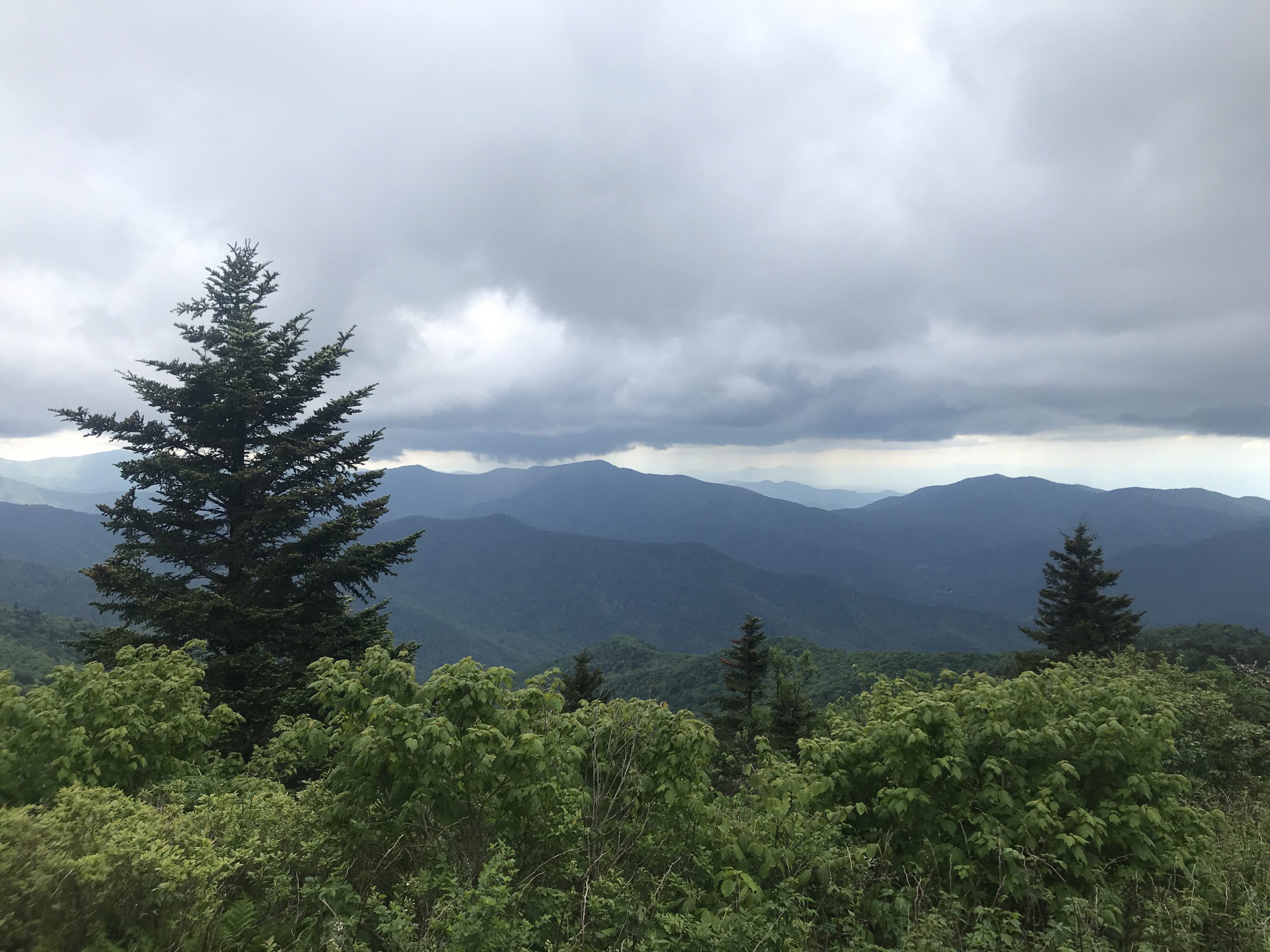 Since my first attempt, few days have passed where that trail did not hike across my mind. I never mustered up the time or courage to go back, and for what? To fail again? Two years passed, and while looking for training hikes my dear friend and co-worker Emma and I decided the BMCT was a must-do. As the weekend of the trip drew near, the weather looked pretty good.  About an inch of rain was predicted through all of Saturday, but we thought it was nothing crazy.

The plan was to hike eight miles to Deep Gap, set up camp, and then hike four miles to the summit of Mt. Mitchell and back. My hopes were high; I was excited to get back on this trail. Learning from my last attempt, I brought better bear deterrents (a friend to feed to the bears) and improved rain gear. This time I was not turning back, especially with Emma there to keep me going.

We arrived at the trailhead around 1 a.m. and slept restlessly in the car. The sun came up and we donned our packs to begin the steep four-mile climb to the ridge, soon passing a beautiful stream with a series of waterfalls. My spirits were high as we climbed, and my mind flashed back to my last attempt. A lot had changed from the Dalton who was last here; I’ve learned a lot more about the outdoors and myself, and I now have a mustache.

The initial up was peaceful and serene. Both of us were huffing and puffing in silence. Soon it began to drizzle. We added rain jackets and continued upwards. The drizzle became heavier, and I began to realize what an inch of rain truly meant. My freshly waterproofed jacket was no protection. It could not withstand the increasing pressure as the rain and wind picked up. These four miles seemed to go on forever. The tree line was close. I could feel it, and I made sure Emma knew, too. With the final bit of elevation gain ahead, we trudged more energetically. Then Emma pointed out that the tree line was, in fact, not close at all. Our spirits fell, as did the air temperature as my body chilled beneath a no-longer-waterproof jacket.

After what seemed like an eternity, we made it to the ridgeline. Remembering how breathtaking this scene was last time, I was thrilled to view it again. I was quickly let down. The entire ridge was covered with a heavy fog. I could not see more than two fully-extended trekking pole lengths in any direction. Up here, without the cover of trees, the wind and rain intensified and added a bonus element, hail. I tried to push forward, but every second on the ridge felt like a session with a drunk acupuncturist. After a handful of steps, I returned to the cover of trees to talk with Emma and hear her thoughts.

Emma was surprisingly optimistic about the horrendous scenario. Her optimism gave me hope. We pushed on. After no more than five steps on the ridge, she expressed the same concerns I had.

We had another discussion and decided to push on. We trudged another five steps, then turned around and were forced below tree line. This was a tough call. Turning around once was hard enough, but turning around twice? To me it was painful. 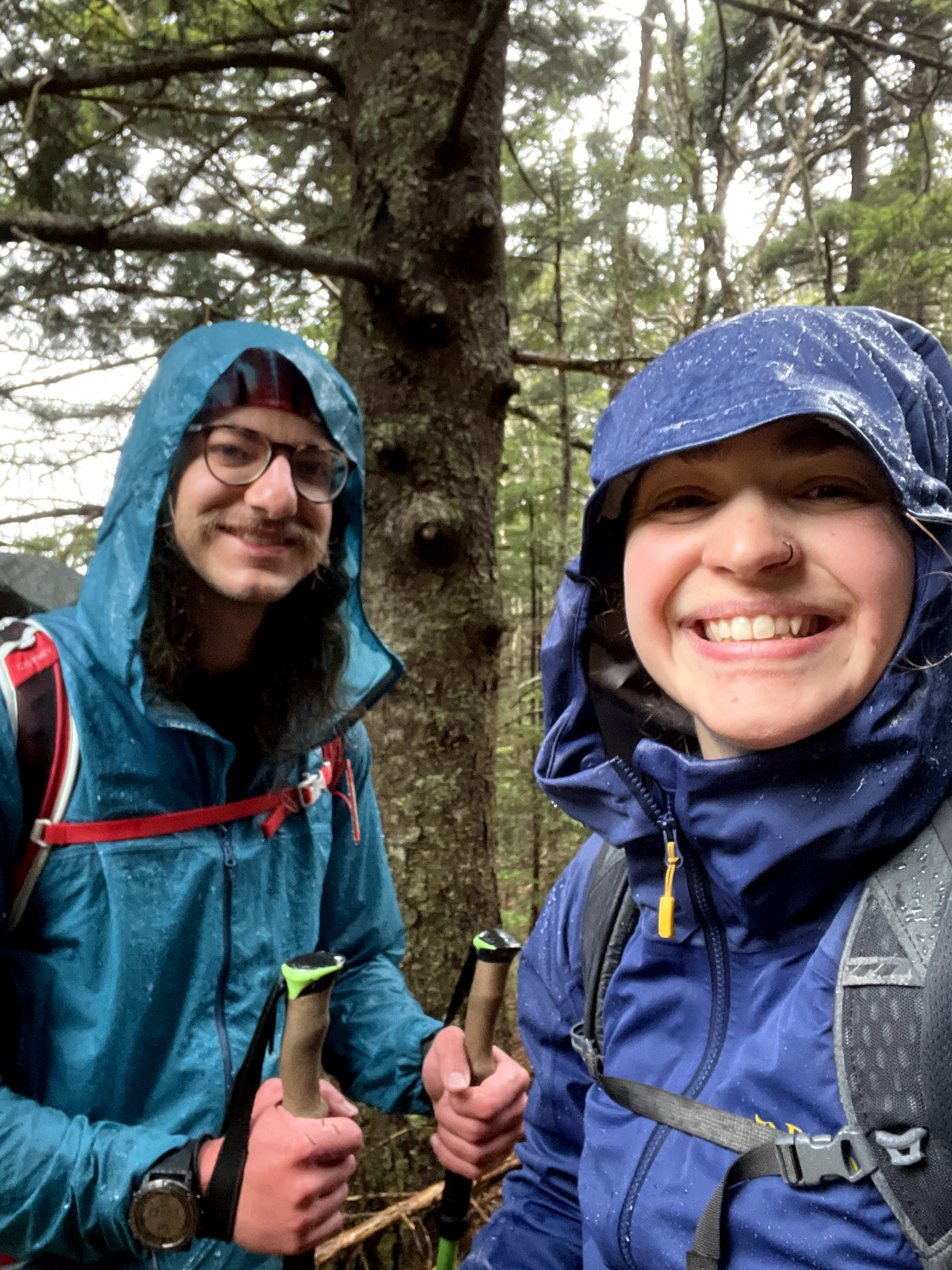 Turning around should be a group decision, not the decision of one person. This is always the toughest part. I did not want to let Emma down, and she did not want to let me down. My hands stung from the cold, so I gave in and suggested we turn back. Emma agreed, much to my relief. We began our descent without second thought.

While the way up was full of hope, the way down was dreary. We passed a group headed up in high spirits. I wished them the best but was secretly envious. I thought about how far they would make it. “If they made it further than us, had we turned back too soon? How much further could we have made it?” I worked to push these thoughts out of my mind because they led down dangerous rabbit holes. Emma and I continued to rationalize our decision. “We were too cold.” “Our clothes were soaked.” “We did not have the proper gear.” Even with this knowledge, I had a tough time believing we made the right decision.

In the moment, you could be facing the toughest challenge in the world, but once you turn away and look back it seems doable. There was a little voice in my head telling me I was overreacting and that I gave up at the slightest sign of challenge. This voice stayed with me the rest of the way back and lingered through the coming days. 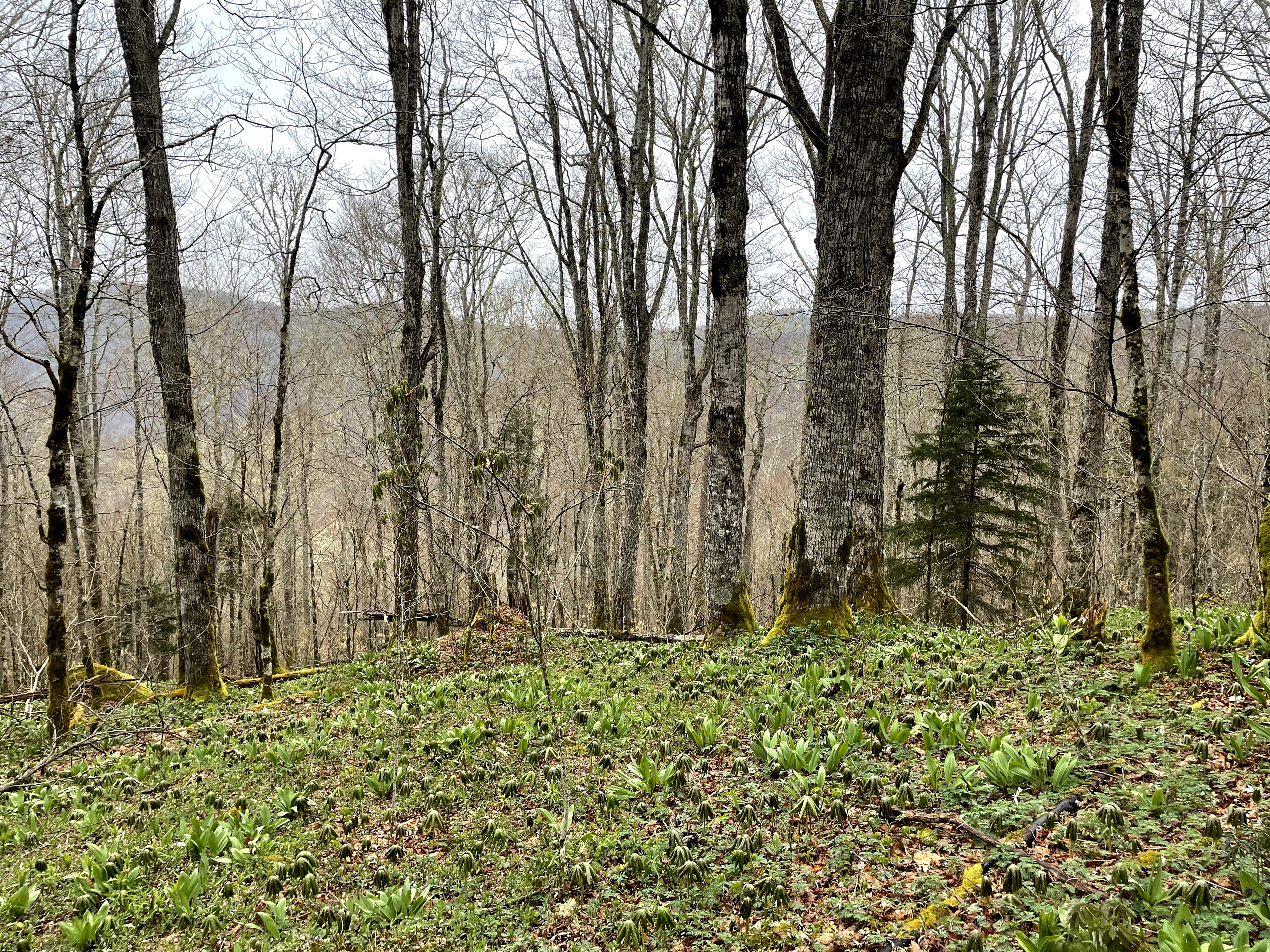 Redemption on the Black Mountain Crest

Fast forward to the end of June, the Sunday before July Fourth weekend. I was still mentally recovering from my last trek on the BMCT, but I had a free weekend and was considering a quick jaunt to North Carolina for another attempt. As fate would have it, while working at RRT a regular customer, David, came in asking about the Black Mountain Crest Trail, with plans to attempt it that weekend. I mentioned my desire to do the same, and soon enough we had plans to hike together. This time, we planned it as a long day hike, which was significantly more ambitious than my previous attempts.

We drove to the trailhead Friday night and arrived late, quickly finding spots to set up hammocks but not before sharing lukewarm PBRs with people living nearby. Unexpected interactions like these make me fall more in love with the outdoors and its community.

Waking up in Pisgah National Forest was like waking up in a rainforest. The ground was damp as the morning dew dripped from the trees and the sunlight worked past the thick canopy. We ate breakfast and headed up the trail. We maintained a good pace through the first four-mile push and aimed to hit the summit by noon, averaging two miles per hour. At the ridge, the trail became less maintained, and rather than enjoying the scenery we had to keep our eyes on the ground for roots or holes waiting to twist our ankles. As I stumbled to Mt. Mitchell, I could not help but think that if I was already this tired on the way up, then I was horrified for my legs on the way down. 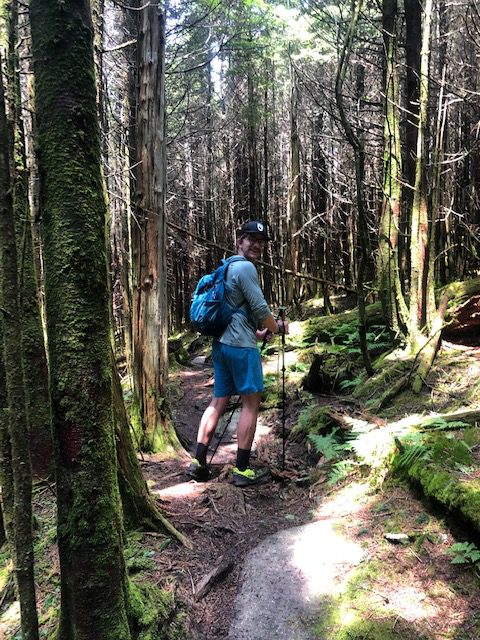 We cruised into mile eight of 24 and stopped for lunch at Deep Gap. After refueling, we pushed onward.  We stayed quiet and kept to our own thoughts and miseries. A few miles later, we crossed the border into Mt. Mitchell State Park and its well-maintained trails. We picked up our pace, only to be slowed by crowds of people. After being stuck in my head for the past several hours, the small talk with strangers was a welcome distraction.

The maintained trails gave way to a paved parking lot, a staircase, and a ramp that took us to the highest point on this side of the Mississippi. The juxtaposition between the rugged trail we had spent the past six hours on and the summit parking lot was jarring. Fortunately, with great amounts of concrete come great amounts of aspirin from the summit giftshop, a key factor in our success. Without that, we would not have made it very far on the return.

Making it to the top was incredibly rewarding. We could see from the Roan Highlands all the way to Clingman’s Dome in Great Smoky Mountains National Park.  An accomplishment I had been trying to complete for several years was done. Except, of course, we were really only halfway done. We still had to go all the way back down. 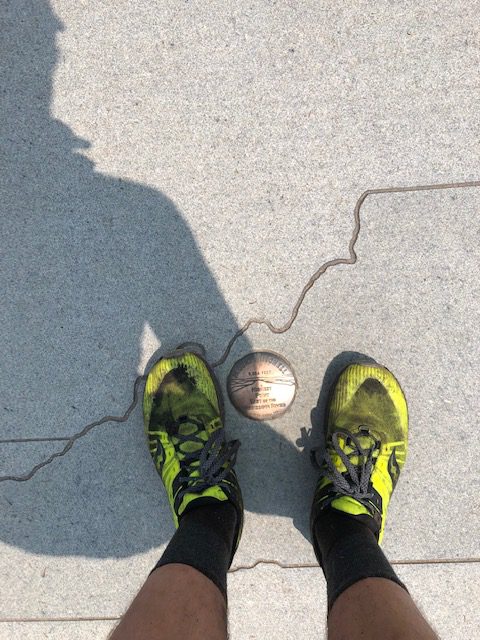 After resting for a bit, we began pushing down the mountain. Pushing sounds like an odd way to describe hiking downhill, but it truly was a push because the hike back to the car was not just downhill, we still had roughly 2,500’ of gain before the final four-mile descent. David had trouble going downhill and I had trouble going uphill. With our strengths and weaknesses balancing out, we leapfrogged past one another on our six-hour return journey. Many people passed us on their way up, and although I was excited for them I was glad David and I had put those miles behind us.

Throughout the trip, as happens on any backcountry excursion, we had dreamed up the perfect post-hike meal: iced-coffee for David and a big Gatorade for me, then digging into $5 Hot and Ready pizzas from Little Caesar’s. Bellies full and thirst quenched, we drove home silently, taking turns napping and driving. A bucket list item that had haunted me for two years was over just like that in a whirlwind 30 hours.

Early in my outdoor career, I was fortunate to avoid making the tough call to turn back. I have since found this is not how things will always be. The past few years have been filled with failed adventures. I still valued these experiences and learned a great deal from them, but it will never be easy to make that call. Turning back on something you value is tough and something I am still learning and growing from. As I’ve taken on bigger endeavors, I’ve looked for this quality in the people I travel and climb with. I want to know they will not push me into prickly situations but will push me to be a stronger person, and I will do the same for them. 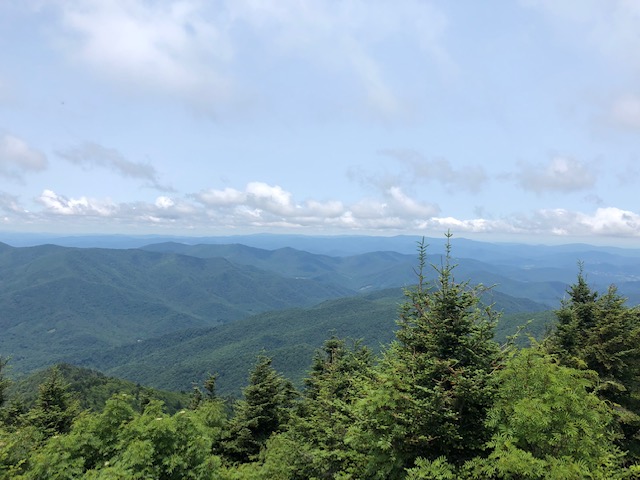