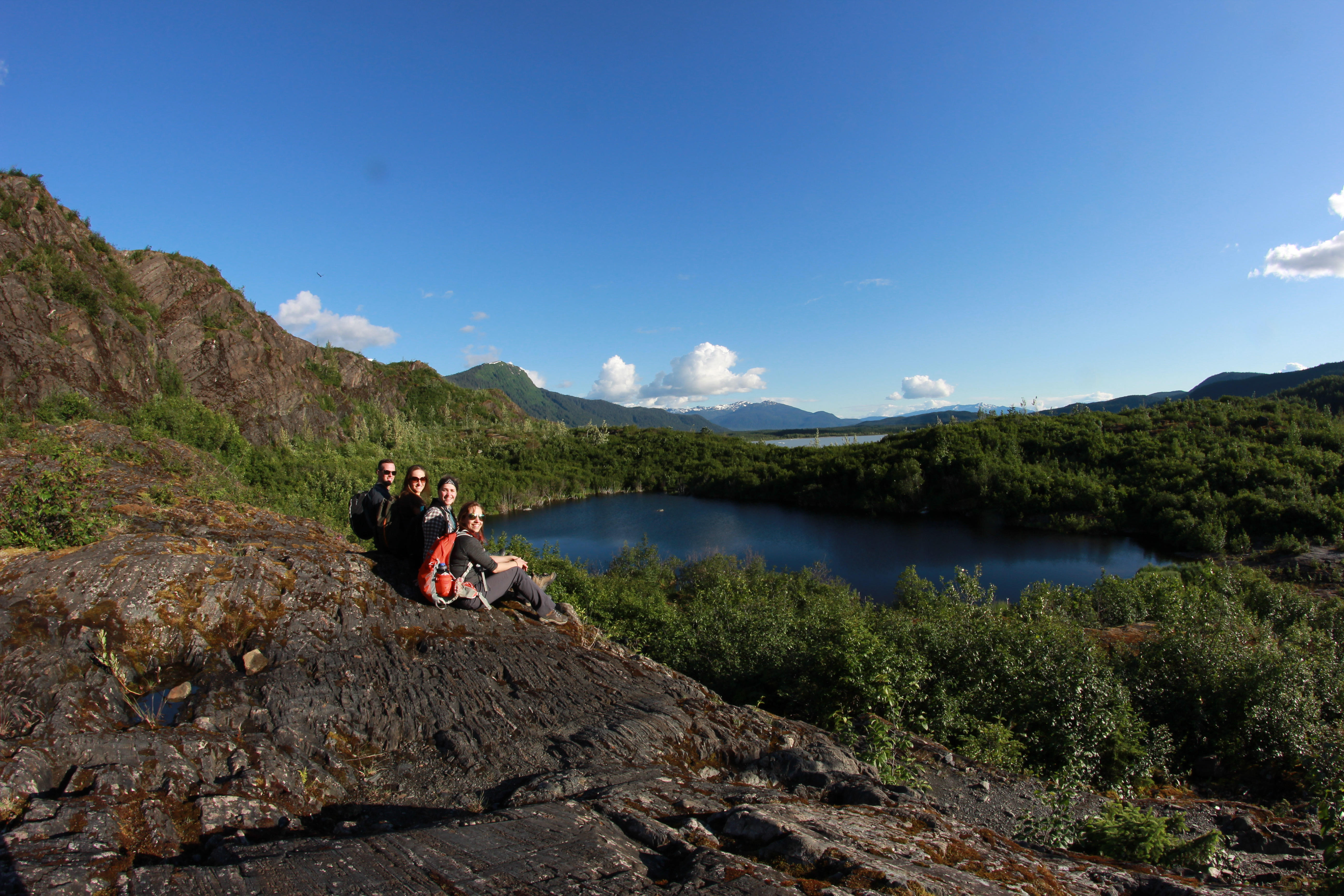 Though I am often told that I don’t look much older than a high school student, it turns out that I have a few years of post-colligete experience. My first two years after undergrad were spent volunteering through an organization called Jesuit Volunteer Corps Northwest. From August 2015 through June 2016 I lived and served in Ashland, MT, and then spent August 2016 through July 2017 in Juneau, AK. These years, though potentially cliché sounding, changed my life and have given me a new perspective. There was more to these places then the beautiful scenery, there was also pain and suffering deeply rooted with its people. But before I could see more deeply than what was in plain sight, I had to take it in fully.

Arriving in Montana was surreal. We (myself and several volunteers serving throughout Montana and Washington) traveled for 22 hours on a Greyhound bus from Portland, OR across the arid, open country of Eastern Washington and the rugged sections of Western Montana. Dropping off other volunteers in their respective cities along the way, our group was the last to get off the bus in Billings, MT. From there we drove two more hours eastward out into the plains toward what would quickly become our new home in both a physical and spiritual way. The final stretch into Ashland is along Route 212, known locally as The Flats. I sat in the front seat of our community car, a Chevy Suburban, squished in between the driver and one of my new housemates. The driver, a former volunteer and Ashland resident, was telling us about the area, but all I could take in was the sky. It stretched on for miles in every direction, holding the trees against the distant blue, some of them old and some newly growing from the aftermath of a 2012 fire. Our home, settled into a hill was situated facing almost perfectly south. The hills to the east often blocked the sunrise, but were perfect to climb and to spot passing deer. The open plains to the west gave our porch a front row seat to some of the most stunning sunsets, lightning storms and meteor showers I’ve ever seen. The isolation of Ashland made it special in my eyes. The volunteers didn’t often travel away from home to explore other areas of the state. We could drive almost 100 miles in any direction and not come across a large town. Rather we found a close connection with the people in the town of 400 in which we lived. Many of us served at the same place, St. Labre Indian School, in some capacity. When we weren’t working, we organized Ultimate Frisbee with students and staff. We stayed late on campus, volunteered with the fire department, played in the school band, chaperoned the prom, and coached soccer, cross-country, track, and basketball. Each of us found a personal niche in the community either at the school or at the Heritage Living Center up the road. In the time away from the local community, we rested by spending time on our porch, our roof, and our yard (if I’m being honest, I mostly napped a lot).

It was easy to find the beauty of nature in Ashland. Outside of the sky and the wide plains, the culture of the Northern Cheyenne people created a sacredness and a sense of mystery around the plants and animals that surrounded our home. Suddenly the smell of sage and the sounds of dripping water were more than just sensations, but were a part of me. The horses outside of our yard every morning were familiar not just as animals, but also as individuals. Standing in the pouring rain felt like a cleansing, like coming home. I’ve never felt closer to the core of my being and to my connection with my surroundings than I have in this place. But I know that this is not a continuous experience for everyone living there.

There is more to say about that after an explanation of my time in Juneau.

After one year of Montana living, I decided that I wasn’t finished with the Northwest. After pushing to be placed in Alaska (because it’s ALASKA), I found myself in a new home in the rainforest of Juneau. When our plane from Seattle touched down, it was a typical August day in Southeast Alaska. The silhouettes of the mountains were quickly visible then swallowed up by ever-thicker clouds. What felt like the last ten minutes of our descent were spent shrouded in 2pm darkness. As we were driven home we were told that on a good day we would be able to clearly see the mountains across the channel through our living room windows. The next morning, on a semi-clear and less cloudy day, we were welcomed to that view of what makes living in Southeast Alaska worth it even with occasional months without sun. Cradled in between multiple summits within walking distance of downtown and the Tongass National Forest, Juneau is a place of magic. Even when I could not see it, to know what was there surrounding me just past my line of sight was mystical in its own way. It truly felt as if I were being held by the earth. With less than fifty miles of road, Juneau boasts its own version of isolation. Many of the people live within three distinct areas and the next twenty or so miles after that are covered by a single road that runs above the shoreline and then dead ends into a beach. Whale tails rise out from the water and you can’t go a day without seeing at least a dozen eagles. These creatures are so present that they too are part of the community. It is also nearly impossible to go into public without seeing someone you know. Though much larger than Ashland, the community here retains a closeness in its own way. Many days ended with fires on the beach just a few miles down the road, or with a walk downtown (and still more naps). A place of warmth even in its sometimes limited 6 hour winter days, Juneau’s ability to blend nature and the city is unparalleled.

Living in a city of 33,000 (with roughly one million visiting during the cruise season) felt much different than living in a town of 400. We had to walk a little further than our own backyard to find the silence and tranquility of what still feels like the wild even so close to a capital city. But wilderness is there in the massive glacier and its blue-ceiling caves, the blue and salmonberry bushes that wind up the mountain paths, and the deep green trees with mists hovering between branches (that remind me a little too much of Middle Earth). Especially mysterious and elusive was the Aurora Borealis that could be seen swirling above the mountains on rare occasions. I’m not sure I’ll be able to say I can watch the Northern Lights from my living room again anytime soon. It is nearly impossible to sit under the aurora or to whistle to an eagle and have it respond (that happened!) and not feel a connection to the earth. The lessons I learned from the Northern Cheyenne stayed with me and I continued to feel a deep sense of oneness with the rocks scattered on the shore, the fleeting Southeast sunlight, and the lone rush of wings of a raven amidst a silent sky.

The physical and spiritual beauty of Ashland and Juneau isn’t difficult to describe. When I discuss my time living in Southeast Alaska and remote Montana, many people immediately mention my luck in living in such beautiful and culturally rich places. Admittedly, when I applied to JVC NW, one of my reasons for wanting to be in Montana in the first place was to explore. I would be lying if I said I wanted to be placed in Alaska purely for the attached service position. However, the past two years have given me a lot more wisdom regarding being a guest in communities such as these. Many people there don’t see their home as a vacation spot or place of relaxation. Rather, it is a complicated mixture of love of the land, of home, and of memories of pain and stress.

As I mentioned before, both of these communities are isolated in their own way. Many people in Ashland have to drive 2 hours to Billings for groceries that do not cost an excessive amount of money. In Juneau, groceries cost more than in the lower 48 regardless because everything has to be brought into the city by barge. When I lived there, I was living simply, but had other finances to fall back on if I ran out of my volunteer stipend. My main concerns were not about food, shelter, or safety. However, many of my students in Juneau at Yaakoosge Daakahidi High School worried about these things daily. It was easy for me to talk about the natural beauty of Juneau when I was miles deep in the forest, far away from the dark corners of the city where many teenagers that I knew and cared for were couch surfing, never finding long-term housing. Further, I imagine that it’s sometimes harder to see the beauty in the long stretches of road crossing Crow country into the Northern Cheyenne reservation when these roads hold the memories of so many deadly accidents.

As a guest in these communities, I straddled a strange line of belonging. I shared in sadness in the passing of life and joy in basketball victories, but those emotions were never fully my own. They were stronger because of my connection to the people who felt them with their whole being, but I could also push those feelings away if I needed to. I could escape to the mountains or the hills and meditate without the guttural feeling of losing a loved one, only eating one meal that day, or being kicked out of home. As a social work student, I remember the importance of self-care. I know that I can’t completely immerse myself in someone else’s story or I will cease to exist as myself. But when living (and especially volunteering) in places like Ashland and Juneau I encourage entering into those stories. For some, Juneau is a one-day stop on a cruise ship, a place to take in the sights and leave as quickly as an effortless inhale and exhale, but to others it is suffocating and inescapable. These places aren’t perfect and it is valuable to remember the experience of those who may be suffering even under a dancing aurora or two miles down the road from my peaceful camp-out on the porch. This is not to say that we can’t enjoy the surrounding beauty, but rather that part of the spiritual beauty of these places lies in the people and communities you can encounter.